Whakairo (Māori wood carving) was brought over by Pacific ancestors when they migrated to New Zealand c900CE. Over the centuries, it evolved from geometric designs to distinctly curvilinear work as the culture evolved and became known as Maori.

The earliest known Whakairo is the Kaitaia Carving and dates to c1300. Probably designed as a roof combing, the carving’s composition features a central male figure with bent arms and legs, very similar to carvings from Rurutu in the Austral Islands. Many of the earliest Whakairo come from this area, and around the coast of both islands of New Zealand.

Over the next 500 years Maori moved inland, and began carving increasingly ornate work as part of tribal and sub-tribal expressions of history, genealogy and the land. Maori oral traditions trace another series of histories back through key ancestor carvers such as Rauru and Ruatepupuke, through to more recent eighteenth and nineteenth century masters such as Hingangaroa, Raharuhi Rukupo and Te Amo-a-Tai.

Most Whakairo are made from totara (podocarpus totara) or kauri (agathis australis, both native trees. Tohunga-whakairo-rakau (wood carvers) used a range of whao (chisels) with pounamu (greenstone) blades and wooden handles. These would be struck by a kuru (mallet). Modern carvers also sometimes use customwood, a cheap, easily obtained material.

Whakairo is distinct with the depiction of human figures, often in complex abstract compositions. Manaia/profile figures are frequently used in the background. Many surface designs are applied, which enhance the main narrative depicted in the carving with their own symbolic stories.

Carving today is typically seen on the hundreds of whare whakairo (meeting houses) around the country, as well as smaller carvings in museums in particular. Whakairo also adorns Waka taua (war canoes) still used ceremonially today. Carved objects, both large and small, are considered Taonga Tuku Iho (treasures) from the ancestors, and were often gifted from one leader to another, a practice still sometimes seen today.

Carving is taught in a range of tertiary and community places today. Masters of the twentieth century include Pine Taiapa (1901-72) and his student Pakariki Harrison (1928-2008), while Lyonel Grant (born 1957) is considered today as one of the masters. Trained by Hone Taiapa (1911-79) at the Maori Arts and Crafts Institute in Rotorua, he began carving meeting houses in 1984 and has since gone on to also carve waka taua, creating whakairo which both pay homage to tradition, but also experiment with new materials and techniques, as can be seen in the house Ihenga at Waiariki Institute of Technology, Rotorua (1996) and Ngakau Mahaki (2009) at Unitec Institute of Technology, Auckland. 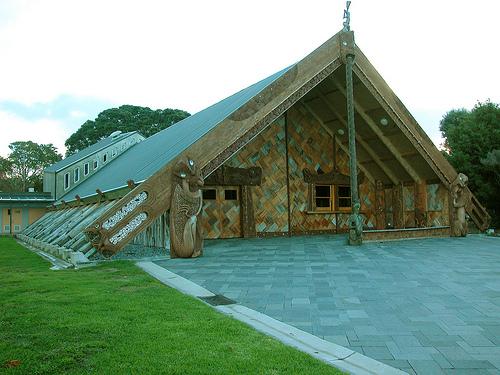