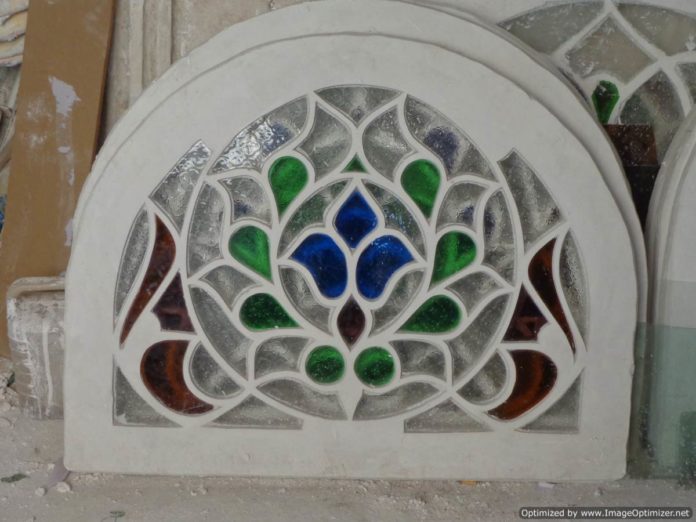 The craft of making this type of arched semicircle coloured window with plaster is considered the the most significant traditional local.  In Sana’a, the practitioners of this technique is called almoqases. The handicraft requires only primitive tools, including knife, compass and some tools for carving. Out of these simple tools, the handicraft makes such magnificent artistic ornaments in different shapes and they are part of the decoration of the Yemeni house. 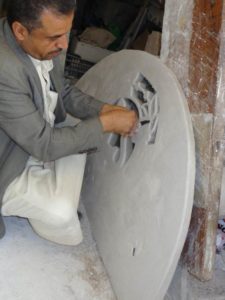 To make the arches, the artisan does the following. He prepares soft clay out of plaster, which is called in Yemen “qus”. It is soft white powder made out of white limestone (calcium carbonate) after it is heated in special ovens to form calcium monoxide and once it is grinded it is ready to sell.

The clay is then laid on a large piece of wood and is to make into a flagstone 4 to 5cm wide and a similar size to the arch window which is required.

The artisan draws ornamental designs on the flagstone, which is soft clay. He uses a special knife for carving these lines to form slots 1.5cm in width which goes through from one side to the other. The outside frame is 4cm in width. The measures must be identical with the opening space of the arch that is fixed on the building.

The slots are cleaned from the remaining plaster and the carved arch on the piece of wood till it is left to dry for 3 to 4 days.

The artisan removes the entire arch off the piece of wood, reverses it and puts it back upside down to fix the coloured glasses from the back side of the arched window. Some pieces of coloured glass in a bit larger sizes than the slots are cut to be fixed on the slots.  A quantity of plaster is mixed with water until it becomes smooth liquid, which will be poured on the pieces of glass to fix them tight. It is left for a while to become rigid. The remaining of the plaster is cleaned from the glass.  The arch is left until it becomes dry and ready to be fixed on the opening space already allocated on the building.

The craft of arched windows does not require a lot of time, but it requires talent from the craftsperson and quickness in carving spaces which are inlaid with coloured glasses. This adds beauty to the house, especially during daytime when the light of the sun reflects a combination of beautiful colours within the arched window.

Due to the excessive usage of this arched windows, many shops specialised in this craft are spread out in different markets in the city and recently this craft was transferred to other Yemeni cities. The most famous practitioner is Obadi Abu Ali who owns a shop in Farwa area in Sana’a city.