Carpentry was found in many Palestinians towns, due to the importance of wood, of which most home furniture, agricultural tools, weaving tools, and wood latticework (moshrabiyyas) are made, in addition to its use in industrial equipment like oil-presses, naouras and musical instruments. It was also the only material used for heating, whether naturally or dissolved with charcoal. This craft is practiced in many forms. There is, for instance, the average carpenters who make doors, windows, cupboards, and olive wood carpenters who carve various religious and neutral souvenirs.

Carpenters used many tools like adz, ripping saws, fire steel, rasp, plane, vice, turner, screw, hammers, meters, scale and sharpening stones. Ordinary carpenters were present in the main towns for centuries ago, but it is not traditionally practiced in the present time. These crafts have faced many difficulties, causing their disappearance by and large from Palestinian cities. These problems include that this craft is not passed on from one generation to another; the relatively low income generated; and the increased use of other materials in the making of doors and windows and furniture, like aluminium and iron. Other problems include the relatively large factories manufacturing furniture in large quantities and low prices, the intense Israeli competition and the importation of wooden furniture from abroad.

However, carpentry does prosper in Bethlehem and Jerusalem with the production of artefacts in olive wood. It was historically associated with the holy land. This traditional craft was set up by the Franciscan monks, living in the Bethlehem area in the sixteenth century. Olive wood is special in its combination of strength flexibility and beauty. The craftspeople made use of these properties to highlight the natural grain of the wood. The wood is later oiled with olive oil.

The wood is usually taken from weak olive trees that don’t bear fruit. The products of this craft include wooden lanterns, children’s toys, sculptors, crosses, churches, mosques, the dome of the rock, and other shapes representing the Palestinian popular heritage like camel convoys, and Palestinian women with their traditional costumes.

This craft was centred in Jerusalem, especially in the new Gate area, and prospered until the 1970s, when eleven factories and workshops could be found. They were run by many families like Hasbash, Qirresh, sa’adeh, Raad, Atallah, el-Qneibi. Those do not operate any more, leaving only one factory in the town, which is owned by Farouk Qunlooz and is situated in the old city, in the Aqabet Darwish Street. However, in Bethlehem area, there were about 702 workshops operating in 2000, employing around 2000 workers. In the year 2003, the number significantly dropped: there were 130 workshops employing 400 workers. Most of them are of family workshops, usually run by people who have inherited the business from their father and grandparents, like Jaqman, al-a’ma, Faqusa. Many of these workshops are still working and supplying the needs of the local and touristic sectors. 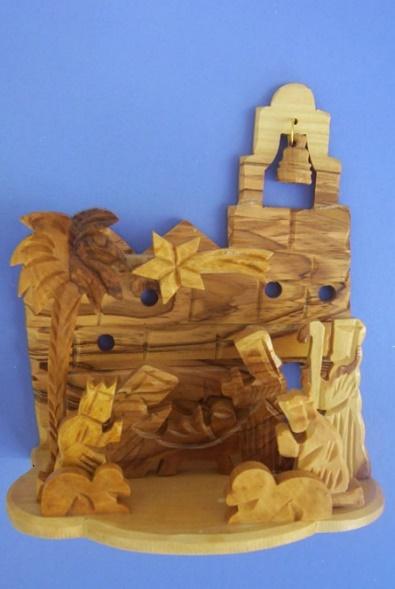