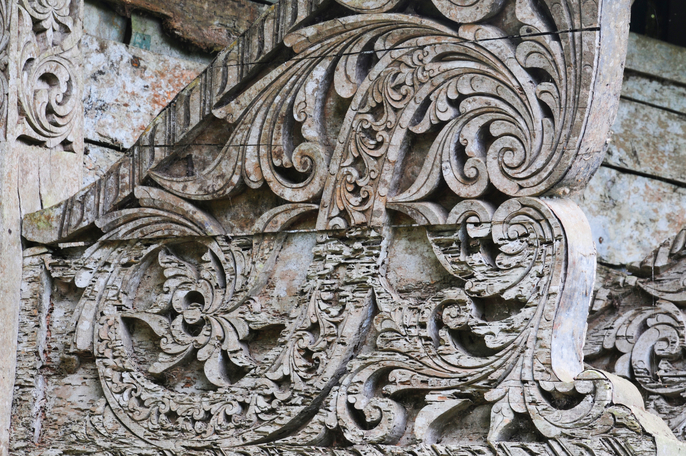 Woodworking is an age-old decorative art in the Philippines.  Probably the oldest existing manifestations of this art form are archaeologically recovered boat-shaped coffins on Banton Island, Romblon Province (fourteenth century CE).  The covers of these coffins were adorned with carved crocodile and snakeheads. More than decoration, however, these details would have been, as in other arts and crafts in the Philippines, invested with ritual significance and believed to have healing powers. Spanish missionaries of the sixteenth century reportedly observed carved wooden idols and boat prows with carvings of serpents.

Throughout hundreds of years, woodworking has been utilised all over the archipelago.  In Northern Luzon, in the Cordilleras among the Ifugao and the Kankana-ey groups, objects of worked wood which were produced include the adze-hewn deities (bulol), rice cutters with wooden handles, bowls and ritual boxes (punamhan and punamgan) with zoomorphic or anthropomorphic elaboration on the lids, and horizontal patterns on the exterior surface; gong handles and spoons carved with human figures; shields, helmets and hats fashioned from single pieces of wood.

It has been speculated that in the South, in Mindanao and Sulu, woodcarving was originated for embellishing boat prows and graveyard markers (sunduk).  Its use has been expanded in the past many years to the ornamentation of Koran holders and kulintang stands and the panolong, Maranao house beams inspired by ancient boat prows; garnishing of weapon handles and scabbards, walking canes, back-strap loom supports, saddles, working tools such as dibble sticks, household furnishing and utensils such as rice measures.

In Palawan island, wooden likenesses of forest mammals, snakes and birds were previously carved, blackened and etched, then used in certain rituals.  In deference to the forest, a wooden likeness may be “given back” to the forest, to replace a real animal captured or killed in a hunt. These are no longer made for that purpose, though once in a great while a few would be crafted for other purposes.

Present woodworking is not confined to religious objects: decorative vignettes of pastoral life, portraits rendered in bas-relief, furniture, household implements such as chocolate stirrers are still being made all over the archipelago. Bas relief can be found in Paete, Laguna and Betis, Pampanga, in artists’ homes and studios, or these can be commissioned directly.  Household implements can be found for sale on roadside stores of Laguna towns and in provincial markets. However, enterprising merchandisers have also put them in formal craft stores in urban centres, in specialty stores in most malls, boutiques or culinary shops with locally made and sourced cooking implements, and in Christmas bazaars.