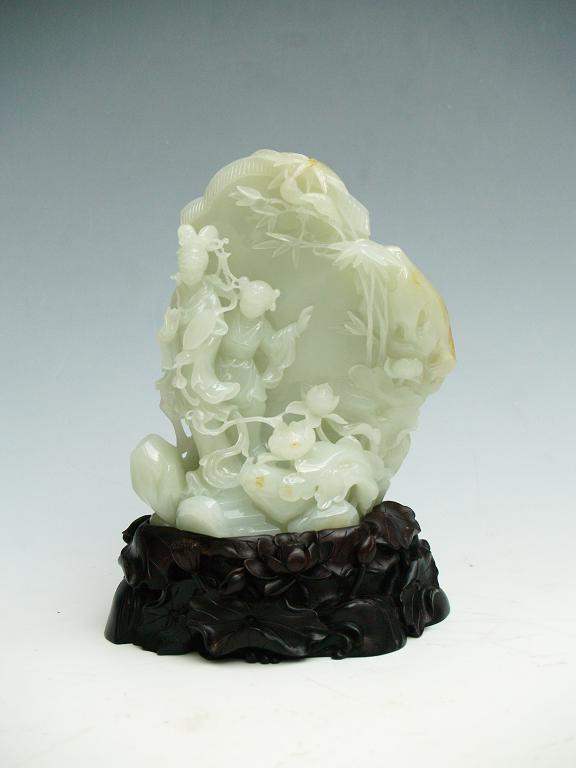 Jade carving is a kind of artwork that uses jade as raw material to create carvings. Jade carving processes include the choice of materials, design, carving, polishing, etc. Jades fall into two broad categories: nephrite and jadeite. Most jade that we talk about in daily life is the nephrite. There are many types of nephrite, which generally refers to white nephrite, white jade, yellow jade, purple jade, dark jade, green jade, celadon jade, carbuncle jade from Xinjiang and xiuyan jade from northeast China, etc.

Contemporary Chinese jade carving techniques can be divided into two styles: the northern faction represented by Beijing covering northern provinces and cities such as Liaoning, Tianjin, Hebei, part of Henan and Xinjiang as well as the southern style which includes regions along Yangtze River and south regions of Yangtze River. The southern style of Chinese jade carving falls into several branches, including “Shanghai crafts” represented by Shanghai, “Suzhou crafts” represented by Suzhou, “Yangzhou crafts” represented by Yangzhou, “Guangdong crafts” and “Fujian crafts”. It is worth mentioning that many regions such as Yangzhou, Suzhou, Shanghai etc. have a lot of practitioners in jade carving with leading carving craftsmanship even though these regions are not the source places of raw materials.

With a wide range of subjects, jade carving can express a variety of creating content such as human figures, animals, utensils, Buddhist statues and jewellery. There are a large number of practitioners in jade carving and countless national-level masters. Song Shiyi, Liu Chaoguo and Jiang Wenbin in Beijing and Gu Yongjun, Jiang Chunyuan, Gao Yijin, Xue Chunmei in Yangzhou, and Wu Yuanquan and Wu Yingwen in Henan are all national-level masters in the jade carving circle whose works are invaluable. In addition, they have set up studios in local and recruited numerous apprentices.