Traditional Turkmen silver jewellery, characterized by linearity, clarity and monumentality, dropped out of fashion in the Turkmen Republic during the 1970s, but is still worn by brides who prefer to marry not in the European-style white dress, but in a partly modernized Turkmen costume. What has remained in families’ chests after the great sales of the 1970s – 90s is then complemented by loans from relatives and newly produced items.

First, there are items for Turkmen brides produced in Turkmenistan and the Turkmen areas of Afghanistan and Iran, often made of less precious materials. These include the gupba, the dome-shaped ornament for girls’ caps (a bride’s costume being a girl’s costume), from which hang down two or three rows of anthropomorphic female teneçir pendants; gül ýaka, a large collar stud; tumar, an amulet holder; and a pair of bilezik bangles. Newly developed types are offered in jewellers’ workshops for purchase or rent, such as sleeved jackets entirely made up of small rings. All these pieces are ethnologically authentic in the sense that they are produced for local use.

Second, there are pieces for the tourist and fashion market, such as small heart- or arrow-shaped asyk,  and silhouettes of horses, teapots or samovars.

Third, there is the massive production of copies, imitations and fakes for the collectors’ market, often made outside of Turkmenistan (e.g. in Peshawar and Istanbul), predominantly not for local Turkmen use and therefore not ethnologically authentic. Among these, the copies of old pieces are sometimes provided with artificial signs of wear and patina.

An increasing problem is created by the large number of pieces with non-traditional characteristics, often of excellent craftsmanship, which are therefore sought after by collectors who are in search of the unusual, including mixtures of styles (Turkmen / Kazak), or new types (silver caps). Jewellers must necessarily fit in with their customers’ often neo-Orientalist, sometimes kitschy aesthetics. Such contemporary production, when falsely labelled as nineteenth century, distorts the image of authentic traditional Turkmen jewellery.

Turkmen jewellery is characterised not so much by sophisticated techniques—they are among those found in neighbouring regions—but by the smiths’ mastery of form and colour. Colouring is restricted to the accord of silver and carnelians, partly enriched by gilding or by coloured glass stones depending on the tribe.

For shaping the items, techniques include hammering silver into thin metal sheets (largely abandoned in favour of prefabricated sheets), sawing, piercing (openwork is sawn or broken through with hammer and chisel) and filing. In decorating the surfaces the methods employed are engraving, stamping with a punch, soldering (box settings for stones, etc.), filigree work (“gallery wire”), fire gilding, the use of matrices and making chains for pendants. The use of niello, or a black matter akin to it, which was extremely rare in earlier pieces, is sometimes to be found in contemporary ones. 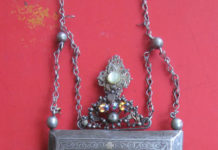