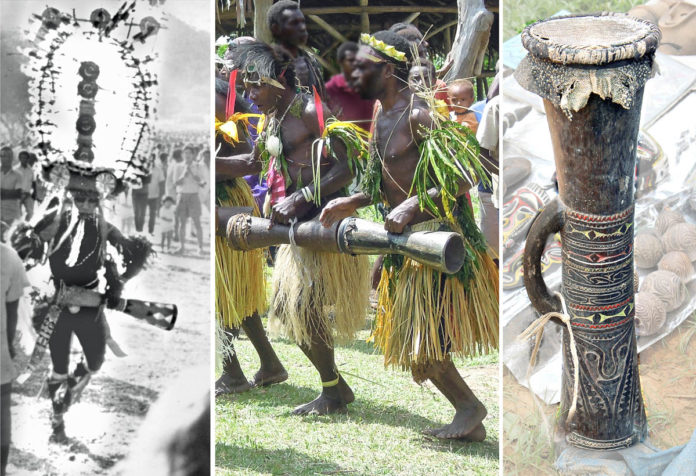 There are two main kinds of drums in Papua New Guinea, kundu and garamut. The kundu drum is a universal Melanesian musical instrument, common to island, coastal, river and highland cultures. It is a portable, lightweight, and robust hand drum. It is hollow inside and has cylindrical ends. Usually under a metre long its end diameters range between 12 to 18cm.

Locally sourced, strong, light wood is hollowed out very carefully to make the sounding chamber and resonant shell. One end has a stretched, lizard skin tympanum with bees wax blobs to help the drummer control the vibrations. The other end is open. Kundus taper to a narrow waist where a handle is located.

The kundu is held with one hand and struck with the free open hand. Kundus are best played en-masse at ceremonial or festive events. Light, robust, and compact kundus can be played while dressed in costume and actively dancing. They are sometimes used with different flutes, garamuts and other instruments for musical performances

Common small kundu drums are often undecorated. Elaborately decorated larger ones are often owned by important men. Cultural identification by incised, maybe coloured, patterns can be added. In some areas, kundus have distinguishing forms such as different waist shapes and/or extended and shaped open ends. 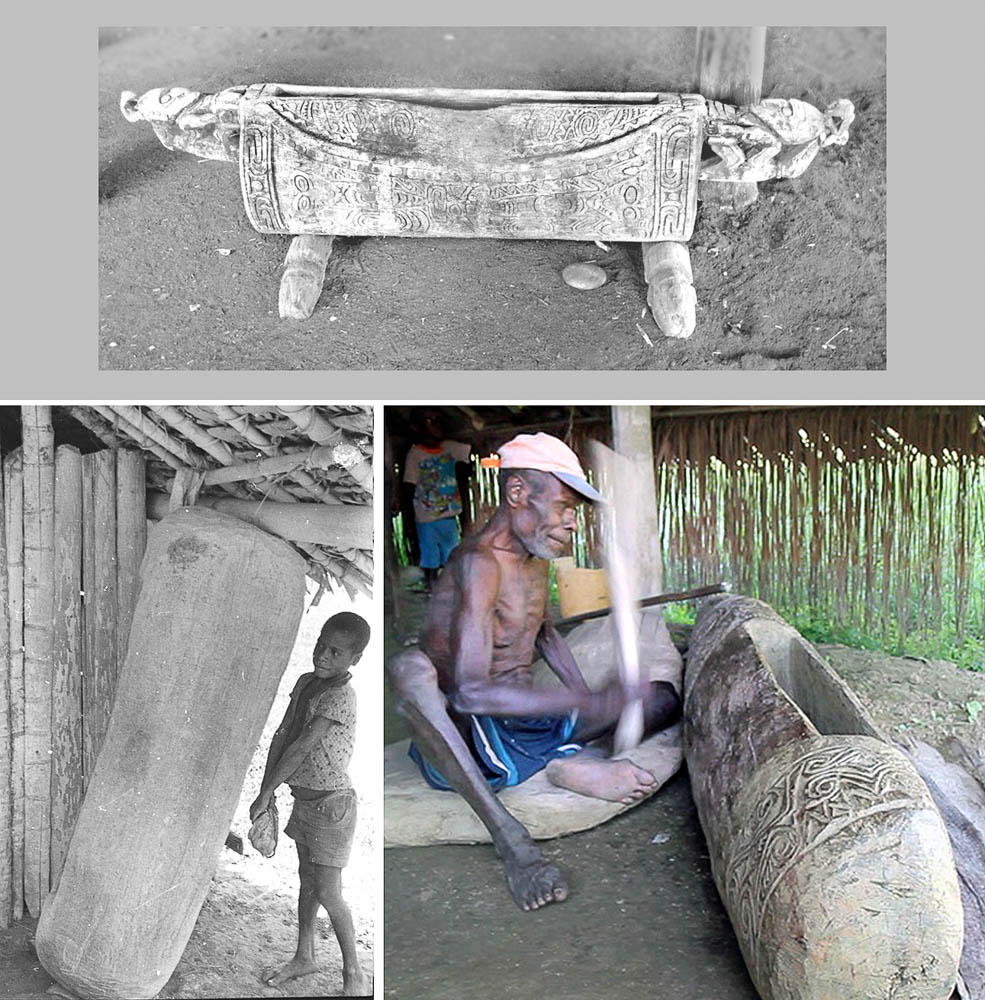 Garamuts are common to islander and coastal Melanesia’s Austronesian language groups, including some of their neighbours, especially the East Sepik peoples. Garamuts are very different to the versatile, portable kundu drums, which these groups also have.

The garamut is a horizontal slit drum, usually big. It is made out of heavy, durable, resonant timbers like kwila (merbau) or garamut. The starting shape is a carefully selected length of tree trunk. The bottom gets slightly flattened, but still looks rounded. Cut away sides taper towards the top (like a teardrop section). A deep slit line is cut along the top and is taken down towards the centre of the base. The inside is carefully hollowed out to make the resonating chamber. Side thicknesses and inner shapes are controlled for strength (beating forces) and timbre.

Large garamuts sit on the floor and are beaten by a single, or a pair of, standing or seated drummers. Very powerful garamuts project sound for well over five kilometres. Coded beating of a garamut sends messages to surrounding neighbours. The garamut’s voice is recognised, as is the signature striking of the drummer.

Skill and experience is required of a garamut maker. Identifying patterns get carved into the sides, and totemic figures at their head. All have distinctive voices, and are given names. Such treasured cultural objects often outlast their makers. Vertical ones are rarer, but are found in some areas.

Stories attach to garamuts as they age. In 2013 one stored under a house in a Kwoma village, Malewai, was photographed there in a men’s house in 1973. That house was long gone, but the garamut has recently been moved into a new house opened in 2016. 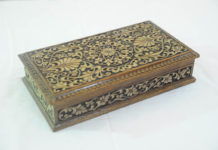