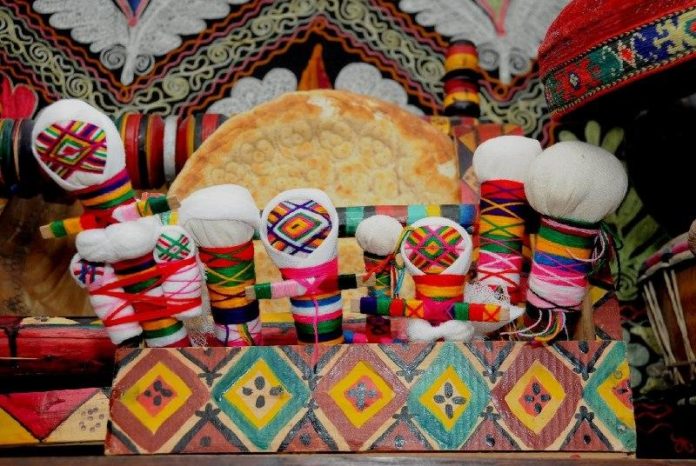 Lukhtak is a traditional Tajik amulet. The creation of the lukhtak doll dates back to the pre-islamic period, the period of Zoroastrianism in the territory of Tajikistan (until the seventh century AD). Children play with it, but it is also created to protect the house and family members from evil spirits.

The lukhtak (talisman, amulet, protective charm) is created in accordance with certain rules for women, and by other canons if it is dedicated for men. Lukhtak amulets are individual: they are made for each person separately. If a person wants to have such amulet in the family, they need to be made for every member of the family. Lukhtak doll can protect a person for many years and not be in demand if the life of the owner is tranquil and stress free. But if misfortune comes to him or a threat to his life, lukhtak is used as intended. It is given to the spirits in return for a real person, throwing it to river or into a fire.

Lukhtak dolls today exist throughout almost all of Tajikistan representing traditions of modern rural residents: in Ziddah, Ramit, Kurbon-Shait, Match, Vanch, Varzob, Garm. They are placed above the height of a person, so that they protect family members by taking on the evil eye and illnesses. The puppets are usually made by elders in the family. If the doll is made to order, the customer himself determines the price and puts money where he took the doll. In the mountain villages, barter is common.

At the heart of the doll is a cross of two tightly tied branches of guzapai (a cotton bush). The face of lukhtak is made from a coin, covered with cloth. The female doll’s face is covered with colored threads that form a diamond while the male doll’s decorated part is its neck. Moreover, when choosing a color for decoration, the age of the person for whom lukhtak is made is taken into account. In various regions dolls are decorated in different ways. Clothes of some dolls are made very carefully and are very detailed. In the mountain district of Karategin, dolls’ hair is made from human hair or cattle wool, while in the Kulyab region its made only from threads. In Garm, twin dolls are made, with single torso but two heads, one above the other.

Nigina Rajabova is one of the most famous traditional Tajik doll makers.