Mosaic involves cutting pieces of colourful wood such as ebony, maple, berry, sycamore ash, teak, shemshad, jujube, betel nut, walnut or pear into shapes and putting them together with glue so that a single pattern is created. Mosaic is divided into two types—flat and raised. The main tools in mosaic are proxy board which is installed on the table, fixed clamps, bow saw, drill, hammer, emery, and polish. 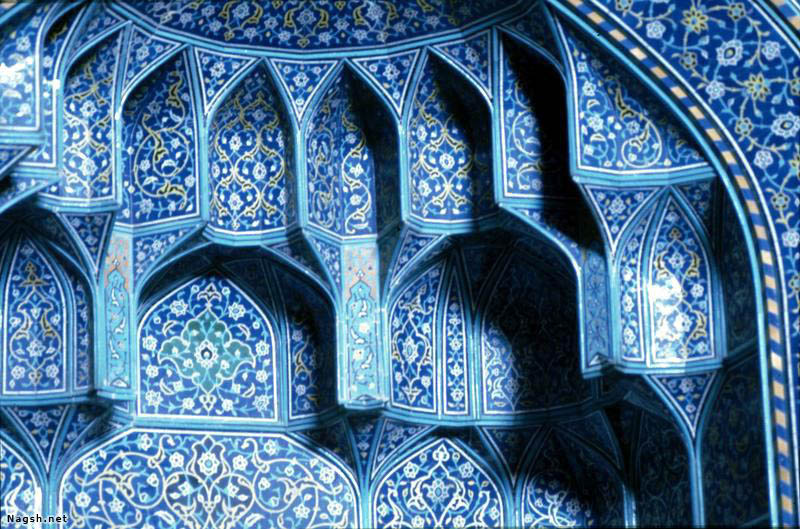 For this art, sometimes metal and shell are also used. Besides traditional mosaic, which is limited to geometrical and plant patterns, two forms of “patchwork” and “alternative” are also nowadays common, which was invented three decades ago. In the “patchwork” method, some realistic and naturalistic figures are used by applying suitable and uniform changes with wood colours. But in the “alternative” method, the working technique is completely different. In this method, they put their desired image on a flat sheet of wood as their background sheet. They cut the figures from the images and create empty spaces of figures on their background sheet. Then they use the cut figures as patterns for cutting the woods with different colours and insert them in their background sheet. Then, they are sanded and polished. This method is so delicate that in the first glance it appears like a painting on the wood.

In light of its history, some date the history of mosaic to the fifth millennium B.C and refer to a wood comb which is found by exploring Shah-e-Sookhte (the Burnt City). But overall, because of the nature of wood which has little durability, very few samples remain from historical mosaic arts.

From the beginning of the twentieth century, some master such as Ahmad Raana, Ahmad Emami, Khalil Emami, and Ali Emami are performing this kind of art. Nowadays, in Iran mosaic field has very professional and skillful masters among them Sayed Kamal Mirtayebi, Mehran Amirinanloo (founder of colour separation mosaic) and Mohsen Kaveh (founder of alternative mosaic) could be mentioned.

In Iran, since the middle of the third millennium, this art is being taught in the field of handicrafts and the most prominent cities in which etching is practised include Isfahan and Tehran. The masters teach it in public or private workshops, some art universities and some craft collages. 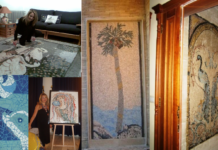 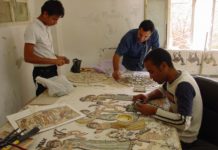