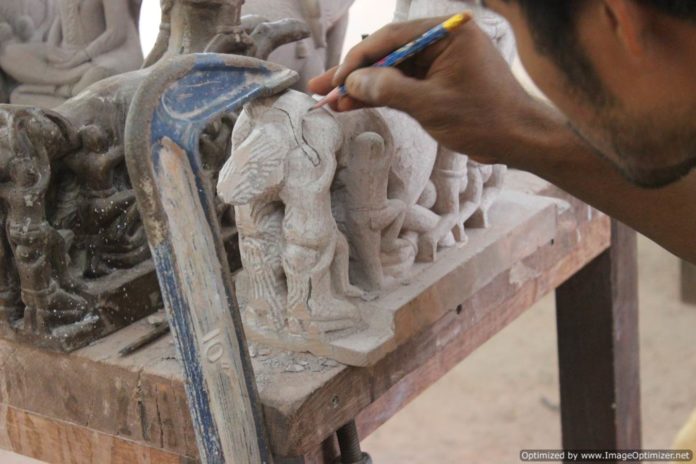 Stone carving is particularly emblematic of Cambodia owing to its important use at the Angkor site, where numerous imposing bas-reliefs were sculpted on the sandstone walls of the temples. Stone carving skills were passed on from generation to generation and were the first revitalized crafts after the Khmer Rouge period. Nowadays, most sandstone sculptures in Cambodia are inspired by parts of the Angkor site or emblematic symbols of the Khmer Empire such as images of Buddha, King Jayavarman VII, Apsaras, Hinduist divinities and sacred animals like elephants and lions. 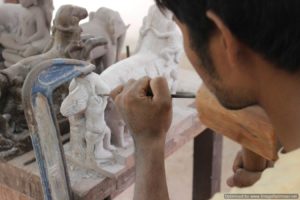 In order to produce by hand a sculpture in sandstone, the craftsman first rough-hews pre-cut blocks of the material to get as close as possible to the overall shape of the final statue or bas-relief carving. The artisan takes the measure of the sculpture and defines the rough outlines on the block of stone by the means of a gauge. He or she then sketches the shape and roughs out the block of stone around the wanted design by following the veins of the stone.

The artisan begins the actual carving, keeping in mind that the removal of each chip of stone is irreversible. This step is therefore carefully done by measuring each inch of the original 3D molding model with a compass; outlines of the sculpture are precisely drawn onto the block. In order to define more precisely the design of the final piece, the craftsman cuts the block with straight vertical cutting gestures using a chisel and a mallet. The curves and volumes are drawn and refined thanks to the use of gouges, chisels, scissors and scrapers. The final step requires the use of abrasive materials: the craftsman removes remaining tool marks with sandpaper and finely smoothes off the whole surface of the sculpture. The statue is then cleaned with plain water in order to rub out any traces left by the carving tools.

Some sandstone sculptures, particularly the bas-relief carvings, are protected and embellished with lacquer and gilding. Their final aspect is similar to several of the bas-reliefs located on the walls of Angkor Wat.

Stone carving is mostly practiced in three provinces: Siem Reap, Banteay Meanchey, and Pursat. Sandstone is extracted from various quarries in northwestern Cambodia. Two kinds are from Phnom Chunh Chaing in the Banteay Meanchey province: a gray type and a yellow one with iron-brown veins. Also in the Banteay Meanchey province, more precisely in Phnom Srok, can be found a grayish-pink one. The grayish-white one is mainly extracted from Phnom Hop in the Siem Reap province, whereas the white type, with various veins colors, can be found in the Kampong Thom province.