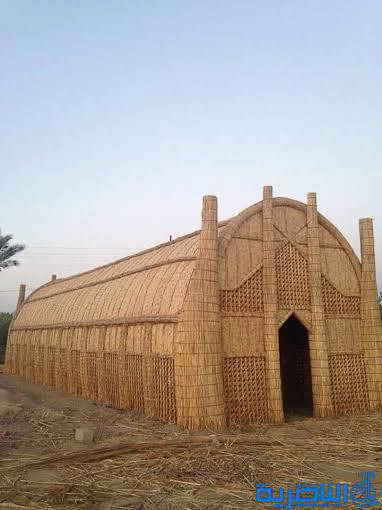 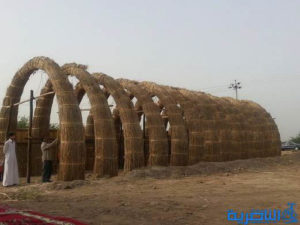 The ancient land of Mesopotamia hosts two great rivers—the Euphrates and Tigris—that flow from the Turkish mountains in the north, through Mesopotamia, and then, at the southern Iraqi alluvial plain, both rivers reduce their flows where the delta areas between Nasiriyah and Amarah provinces shape the marshlands. This land hosts a unique ecosystem of wide lagoons, mudflats and reeds, with a variety of fishes, migrating birds and buffalos, and limited agricultural practices. The reeds have always been copious in the southern marshes of Mesopotamia; “two species most widely employed there today are Phragmites australis and the less common Arundo donax … Together they are used for building shelters, fences, partitions, and many other applications.” (Moorey, 1999, p. 361).

The tribe is the core structure of the marsh’s society, where each tribe identifying by its mūḍīf; the location of the tribe’s social activities. Literally, mūḍīf is the place of the tribe’s collective living practices and hospitality, where the tribe leader, sheikhs, meets with his people and discusses their daily living challenges and agrees on ways to treat issues, such as seasonal flood, constructing and maintaining irrigation canals, solving problems and enhancing the relationships between the tribe’s families, hosting the tribe’s guests, practising religious ceremonies. Also, the mūḍīf maintains cultural roles and statutes relating to gender and the social class attendances and practices (Al-Dafar, 2015).

As an architectural structure, Al-mūḍīf is an ancient iconic design, built by reeds only, and furnished later with soft furnishings, mainly local-made rugs and kilims. The construction of Al-mūḍīf relies on the knowledge and skills of local artisans who have mastered techniques and tools in constructing this ancient unique design. These artisans represent traditional craftsmanship systems, directed by families, where knowledge is passed from fathers to sons, and specific production techniques are protected. However, due to many natural and man-made circumstances, the efficiency of this traditional system is declining. Furthermore, Al-mūḍīf supports the tribe’s socio-cultural norms as an important signifier of its size, power and wealth. Building Al-mūḍīf is a collective process, where members from each family in the tribe must participate, either in supporting the building work or through financial donation.

Al-mūḍīf structure is based on curved arches, with over five arches, and can be repeated by odd number to 21 arches in a row. These arches are constructed from coniform shaped long and thick bundles of dried reed, with diameters sloping from 2-feet at the bottom to 1-foot at the top. A hole in the ground accommodates each bundle in two parallel rows. To create the arch, the top end of the left and the right bundles bend until they link, and are then joined by weaving the reed to create the arch. This process is repeated until all the bundles are joined to make Al-mūḍīf bone structure. Large overlapping reed mats cover this bone structure. Two parallel columns of palm trunks at each end support the reed tunnel shapes, and these trunks are covered with reeds and latticework. Al-mūḍīf can be accessed through a wide entrance open gate at one or both ends, and this main gate is also surrounded by a smaller gate at each side. The overall dimensions of Al-mūḍīf reach 24 to 98 feet in length (based on the number of arches), and from 10 to 15 feet in width, the bigger the size signifying the tribe population, power, and wealth. Al-mūḍīf reeds are harvested by men and women, and transported by boats from the marshes to the building site, where the reeds are stripped of their leaves and dried. Specialised builders supervise this process, with support from approximately 20 men from the tribe community; the building process relies on handwork without any industrial machines, except knives to cut the reeds and ropes.

Although crafts are an ancient and seminal part of the Iraqi cultural heritage, a massive decline resulted from unbalanced development associated with natural and man-made disasters in the Marshland region in particular. Moreover, the social changes in the way of living and people preferences toward permanent houses instead of the reed ones. The craft skills of the building by Reed’s has degraded and lost forever. Even with the recent development in 2016, associated with UNESCO’s listed the Marshland region in Iraq as part of the World Heritage Sites. Institutional and social group support to rebirth this traditional building knowledge and skills is much needed to continue maintaining the uniqueness of this craft.