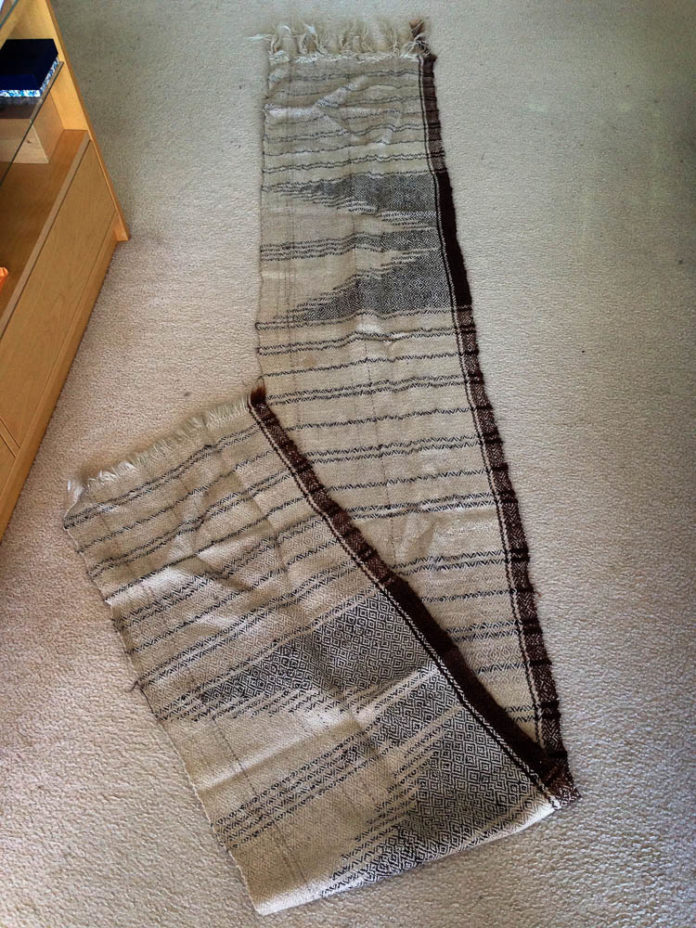 Kurdistan, in the north-east region of Iraq, is mainly covered by mountains and has been inhabited by the Kurds since ancient times. Kurdistan is approximately 390,000 km2 and is divided between Iraq, Turkey, Syria, Iran, Armenia and Azerbaijan. Archaeologists have evidence that, over 8000 years ago, the mountain people occupying and inhabiting this wider mountainous region practised a nomadic lifestyle and had a distinct and unified culture.

In An Introduction to Kurdish Rugs and Other Weavings (1988), William Eagleton identified the “weaving heartland” and presented a map of Kurdistan’s main weaving areas. Weaving wool and goat hair to produce rugs and kilims was one of the major crafts sustained by these nomadic communities—a practice that relied on sheep and goat herding. The rugs and kilims were essential material objects in a nomadic lifestyle, providing protection from the harsh mountainous environment and accommodating the need to frequently change locations as they sought better pastures for their cattle (Wendorf, 2002).

Rugs and kilims have historically represented cultural norms and, based on the craftsmanship of these products, each rug is unique and provides clues about its origin and maker. The Kurdish carpets are influenced by the wider regional carpet traditions, such as Persian, Turkish and Caucasian carpet-making in neighbouring countries, from which they borrowed and implemented various design elements, dying techniques, and manufacturing process. However, detailed elements relating to the weaving and dying techniques can still be traced to the nomadic tribe or geographical areas, which specialised commentators can identify (Eagleton, 1988).

The Kurdish weavers, who were mainly women, were inspired by their environment, and transformed these natural shapes into abstract and geometric design elements, relying on their imagination and spontaneity. Traditional design elements of the eight-pointed star and other octagonal forms, drawn with creatures, such as turtles, birds and flowers, and other familiar objects, such as combs and talismanic shaped jewellery, were combined in busy compositions are popular examples from traditional Kurdish rugs and kilims. The old Kurdish rugs used deep and highly saturated colours, with red and blue dominating, but with pinks and oranges also used by the female weavers. The colouring process was based on natural dyes, although synthetic alternatives are now used.

In relation to production techniques, Kurdish rugs are woven on relatively narrow looms, with the length of each rug often twice the width, with variations of between three and four feet long. These rugs were used for sitting, and to separate interior spaces in the village houses. This was also true for the flat-woven kilims, which were sometimes produced in two matching halves that could be sewn together to make a larger piece. As distinguishes tribal and nomadic designs, the ends extend and are joined in groups, with several inches in length, to produce the “wild barbaric” appearance shown as a feature in the Kurdish rugs (Cemal, 2014).

The Kurdish rugs and kilims produced in Iraq are entirely of tribal origin. There are three major locations where these traditional handcrafted rugs and kilims were produced:

It’s a traditional custom for each Kurdish girl in the Kurdistan countryside to weave a piece of kilim, then present it during a collective ceremonial event to her nuptial husband as a sign of sharing wishes and hopes for good future.

This unique traditional weaving of rugs and kilims in the Iraqi Kurdistan is beginning to fade, which is a result of various socio-cultural, political and economic influences. The traditional transformation of this craft from older generations to new ones is not functioning these days.

However, much work is needed to promote this important cultural craft, such as the early efforts supporting the establishment of the Kurdish Textile Museum in 2004 in Erbil to accommodate various woven arts from both settled and nomadic tribes, “with the aim to preserve the Kurdish cultural heritage and promote the Kurdish weaving practices so that this rapidly vanishing culture and its remarkable art will not be lost, but revived and even developed.”