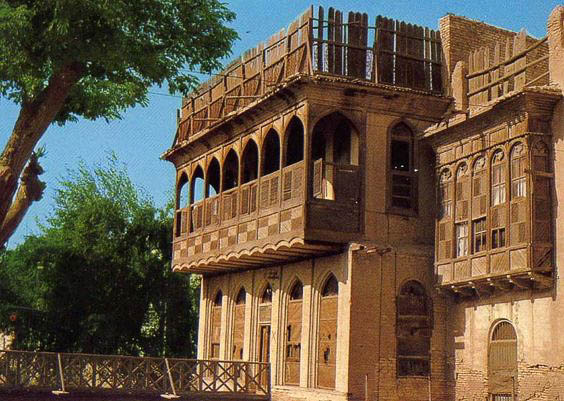 The shanasheel is an Iraqi name for the mashrbiya, a well-known Islamic architectural element, which appears as an extruded wooden structure from the frontal façade of domestic buildings, and distinguishes the designs of traditional houses in the big cities in many Middle East and North African countries. In Baghdad and the major cities down to the deep south of Iraq, traditional house designs are characterised by one or two storeys, and built of a mix of baked and sun-dried bricks, set out around a courtyard, which functions as a central space of the dwelling’s collective living practices. As well, it influences and improves the living conditions by facilitating sunlight and airflow. In these houses, the shanasheel dominates the façade of the second storey, and offers a microclimate based on its unique design of fine joinery that is constructed mainly from teakwood. Through adjustment of its latticework windows, the shanasheel is capable of opening and closing to enhance the recreation and comfortable living conditions during the day in relation to the air ventilation and natural lighting.

Moreover, the design of shanasheel offers creative solutions to fulfilling the restricted custom for the occupants’ privacy while allowing them to observe the street. At the same time, shanasheel appears as a signifier for high social class in the local society, based on the excessive cost of its construction materials and the skilled craftsmanship required to build it.

Shanasheel designs creatively embed the principles of Islamic geometric style, showing through detailed latticework shapes, structuring and covering of both the exterior and interior walls, partitions and the windows. These heavily-ornamented wooden structures are linked aesthetically with the geometric brickwork covering the predominantly solid facade of traditional houses. Specialised craftsmen use their dedicated skills and techniques to construct a shanasheel. They use their ancestral knowledge about materials to protect it against the region’s harsh weather. The intense summer heat affects even the best wood through shrinkage, warping and splits. These environmental considerations are associated with the high cost of imported teak wood and available techniques and tools. These considerations are reflected in the shanasheel’s structural elements, which utilise small pieces of wood dovetailed one into another without the use of glue or nails, allowing the wood to expand, shrink and adjust itself without upsetting the overall assembly.

Building shanasheel requires a close collaboration between the house builder and the joinery craftsmen, who must have extensive knowledge in joinery associated with high-skills in making. The building process relies on hand skills supported by basic tools to cut the wood into hundreds of identical pieces. Hand-operated lathes are used to transform the cut pieces into a variety of smooth shapes as beads and joints. The turned pieces are then assembled through interlacing to create a variety of sizes of screens with different patterns. Such fine joinery demands immense labour and patience, particularly since the craftsmen work with strict geometric patterns to make the assembled screens and windows. The shanasheel’s overall dimensions vary, depending on the size the house façade. Most of designs are rectangles with a length of 1.2 to 1.8 metres, and the width covering the distance between the inner house courtyard and its façade.

Shanasheel is a feature of the designs of the private houses, although there are many modified designs for it in use in public spaces, such as the mosques and shrines where elements from shanasheel are modified to serve as partitions and space dividers. The modernisation’ of urban planning in the region, since the 1940s, promoted a more Western style architecture, supported by the introduction of new building materials, which broke with traditions. Extensive reduction in the use of wood as a construction material for both the private and public houses followed and the shanasheel disappeared in the new buildings. In Iraq, particularly, the craftsmanship of joinery was modified to fulfil extended demands for domestic furniture, supported by government policies which banned the import of these products during the 1970s to 2003. Modernisation policies neglected this vital craft sector in the society, although extremely limited efforts were introduced to enhance the production process through imported basic machinery and materials. The craftsmanship and skills required to continue building shanasheel relied on traditional methods that were passed down from fathers to sons. Local skilled craftsmen and the production of traditional wooden designs are still available to fulfil demand for interior doors, partitions, and space dividers for the houses and other public places. While the designs of these products address a vernacular style based loosely on original shanasheel designs, they are less important today due to the chaotic conditions dominating Iraq since 2003.