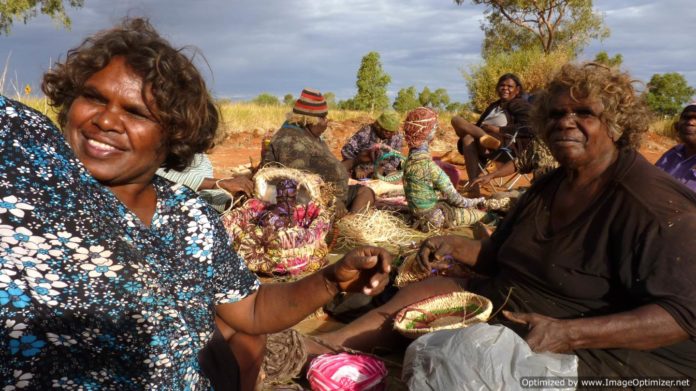 Fibre crafts are active throughout Australia. The techniques include coiling, plaiting and twining. Materials are drawn from the diverse flora of the continent, including native (pandanus, lawyer cane, lomandra and spinifex), introduced (willow, guildford grass) and imported (raffia, wire and plastics). Many fibre products pre-date European colonisation, such as dilly bags, baskets, mats, skirts, fish and eel traps. Today much of the fibre work is produced as art objects for sale in shops and galleries.

Given the use of flora, the fibre crafts reflect a strong regional diversity across Australia. All states, sometimes even individual towns, have their own basketry guilds.

In the west, fibre work can be found in a number of indigenous communities, such as Jilinbirri Weavers in Carnarvon and Martumili in Newman. Nalda Searles has been influential in exchange between settlers and Aboriginal fibre practice. She, along with Kate Campbell-Pope, Fiona Gavino and Cecile Williams have been active artistically.

In central Australia, Tjanpi (“grass) is an association of the Ngaanyatjarra Pitjantjatjara Yankunytjatjara Women’s Council (NPYWC), who promote fibre work from central and western desert communities. These often involve a combination of local grasses with introduced fibres such as recycled wool and raffia. Baskets and sculptural figures can be found in many museum shops and even featured in the 2015 Venice Biennale, in collaboration with Fiona Hall. Philomena Hali is active in Alice Springs.

To the north, Arnhem land communities of Maningrida and Gunbalanya produce coiled pandanus baskets and mats coloured with natural dyes from the surrounding country. The Elcho Island artist Mavis Warrngilna Ganambarr is well known for her innovation in traditional forms. This community collaborates with Koskela Design to adapts baskets to lamps and screens for corporate interiors. The Torres Straits islands are very involved in the Ghost Nets project which makes sculptures and baskets from nets washed up on the beaches.

In the north-east, Aboriginal basketry is quite strong. Mossman Gorge is known for its black palm. Fibre work can be found in the art centres of Yalanji (Mossman Gorge), Yarrabah and Girringun (Cardwell). Key masters include Rhonda Brim (Kuranda) and Abe Muriata (Cardwell) who produces jawun (bicornual baskets). Kate and Stuart Lloyd in Japoonvale set up Okka Wikka to promote fibre weaving in the area. There is an active settler scene as well, involving the Saltwater Basketry Group (Cairns) and Marion Gaemers (Townsville).

To the south, Yvonne Koolmatrie has been instrumental in maintaining traditional techniques of the Ngarrindjeri people from the Coorong wetland, working with sedge rushes. She has expanded these processes to produce art works such as grass aeroplane and was part of the Venice Biennale in 1997. There is also a strong settler scene, including Sendy Elverd.

Across to New South Wales, many artists use grass to reflect on settlement, such as Beth Hatton and Sally Simpson. Jenni Kemarre Martinello has cast Aboriginal fibre works into glass. In Victoria, many Koorie artists use fibre, such as Bronwyn Razem, Treahna Hamm as well as settler artists Ilka White and Adrienne Kneebone. In Tasmania, there is a strong indigenous basketry revival as seen in the art practice of Julie Gough. Gwen Egg uses fibre for large scale community projects.