The medium of glass in Australia is one of the most vibrant in the Asia Pacific region. Specialisations can be found in all techniques involving glass, including glass-blowing, stained glass, kiln-forming, casting , lampwork and beading.

Kiln forming is particularly strong in Canberra, where the artist Klaus Moje established the glass studio at the Australian National University in 1982. In partnership with Bullseye Glass, he developed a technique using cast glass in the kiln to produce platters of extraordinary colour and mosaic patterns. He was made an Australian Living Treasure of Craft in 2006. Others using this technique include Giles Bettison and Jessica Loughlin. Cast glass has also developed strongly under the direction of Richard Whiteley and can be seen in the work of Deb Jones.

Of late, there has been increased activity in Aboriginal glass production. Wathaurong Glass was formed in 1998 as a centre for production of local Aboriginal designs for architectural use through kiln forming. Individual Aboriginal glass artists of national prominence include Jenni Kemarre Martiniello.

Ausglass is the national organisation representing glass artists, which hosts a biannual conference. Canberra Glassworks was opened in 2007 as a cultural complex containing workshops, demonstration areas, gallery and shop. The JamFactory in Adelaide contains a long-established glass workshop that is a hub for production, training and artistic expression. There are number of collective workshops that share equipment, such as Gate 8 (Adelaide) and 10,000 Degrees (Melbourne). Galleries specialising in glass include Kirra (Melbourne) and Sabbia Gallery (Sydney). Glass is taught at Australian National University, University of South Australia and Edith Cowan University (Perth).

This entry has benefited from advice by Canberra Glassworks. 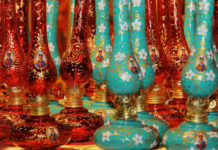 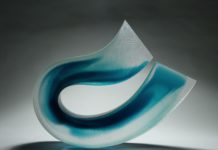