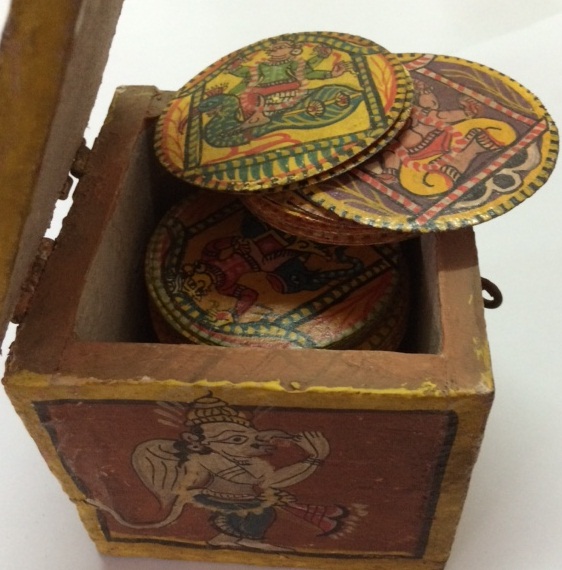 Legend has it that playing cards were introduced to the Indian subcontinent by invading armies in the seventh century. However the first mention of the game of Ganjifa was in 1527, in the diary of the Mughal Emperor Babur. This trick taking game was usually played by three to five players. It spread rapidly from the courts to the rest of the populace, with both the game and the making of the cards adapted to differing tastes and budgets. 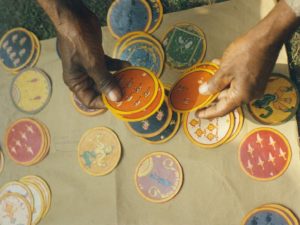 Widespread play led to the evolution of two styles of card making—the Darbar Kalam (courtly style) and the Bazaar Kalam (common style). The former was made of the most precious of materials from ivory, tortoiseshell, mother of pearl to gold and silver leaf and painted by the best artists, while the latter was made of paper, papier mache, stiffened cloth and palm leaves. This tradition of making cards continues in West Bengal, Odisha, Maharashtra, Deccan and Karnataka where it is variously called Ganjifa and Ganjappa.

The cards made include elaborate variants of the game from the Mughal Ganjifa and the Dashavatara Ganjifa where the ten incarnations of the Hindu god Vishnu are incorporated in the game to the Ramayana Ganjifa, based on the epic to the Naksh gambling set and other versions of the play.

Ganjifa has been replaced by the standard 52 card, so has almost disappeared. The cards however continue to be crafted in their traditional round shape in sizes that vary from 2 to 12 centimetres in diameter. Each set takes more than 30 days to complete. Hand painted in natural and mineral colors, the artists continue to take care that the value of the card is not apparent when held. A set of Ganjifa cards is considered incomplete without its equally decorative and intricate sliding box container. The cards are now mainly used as decorative items.