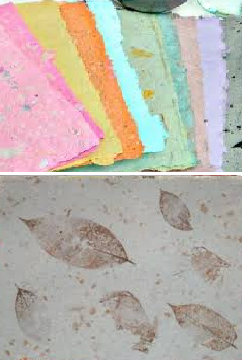 In India the earliest extant texts on paper can be dated to the tenth century, when it is believed that the art of papermaking was introduced by invading armies and settlers. Paper rapidly replaced other writing materials for official documents, paintings, sacred and secular texts and myriad other uses. In Jaipur, papermaking by hand has been a continuing tradition since the seventeenth century. Following an invitation by the ruler of Jaipur, Maharaja Sawai Jai Singh II, the Muslim Kagzi, or paper making community, who had travelled from Persia in the entourage of the first Mughal Emperor Babur, were settled in the village of Sanganer on the outskirts of Jaipur, where they continue to be based. 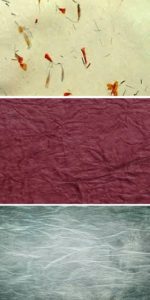 Jaipur paper is largely made of cotton rags that are left over from the garment trade, though the waste of bamboo, sugarcane and jute is also used. The arduous cotton pulping process earlier done by hand is now semi-mechanised. Craftspersons dip framed wire sieves into the tank in which the pulped cotton is immersed retaining just the required amount of pulp. Gently shaken the fibres spread evenly and interlock. The water is allowed to seep out and the sheet sun dried. With each sheet of paper individually made a diverse range is produced. The results feature shades of white to rainbow colors; paper embedded with leaves, grass and petals to silk thread, tinsel and other decorative items. Textured, mottled, embossed, printed, the range is immense with sizes and thicknesses varying according to need.

While the Kagzi community continue to practise their age old craft, many new entrants have set up units. Jaipur lays claim to being the largest center of hand papermaking in India. The product is strong and durable. No trees are cut in its production, instead it upcycles waste. The paper has found a huge market both nationally and overseas.