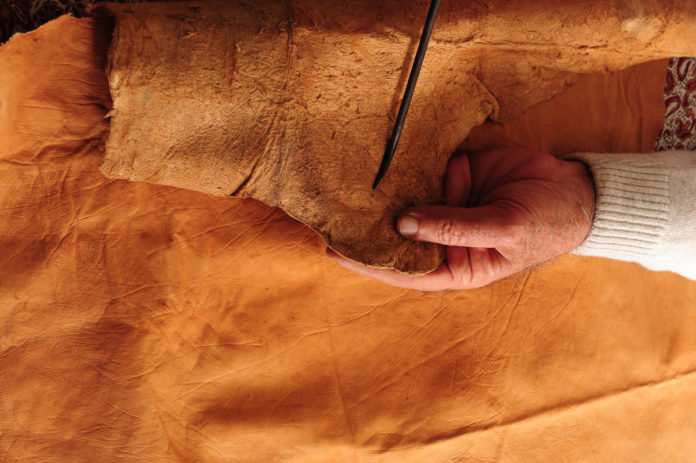 Leather pyrography is an art which creates very fine coloured tableaus by means of real leather patches. In this art different parts of the hide of animals such as gazelle, goat, camel is used. After undergoing processes such as napping, tanning and colouring, they are put at the background of the tableau by means of inlaid technique. That is why the arts which are available bore fruit in the Safavid period in Esfahan and were mostly done in book cover making.

In those times, the cover of precious books and particularly the holy Koran used to be prepared by this method so that all the surface of the cover was prepared by relief motifs on the leather. What is obvious is that the art of real leather pyrography has begun originally by cover making but there is no evidence of its existence as an independent work of art before the year 1931. There have been workshops during those years where all the stage of tableau making including designing, preparation of the sketch and the background, transfer of the design to the leather, cutting and fixing real leather patches and performing complementary stage such as gilt work and also preparation and colouring of leather have been done. The colours utilized in the scratched real leather, when compared with those used in miniature and oil painting, lose their clarity and become a little dark and brownish. That is because they are absorbed inside the leather. Another reason for the nomination of the scorched real leather is concerned with relief working, which is often performed at the margins of tableau or on the covers of precious books by pressing blazed metal beads manually or by means of frames.

The background of the art of scorched real leather consists of papers which are stacked together according to the needed thickness and uniformed piece of work under a press. The whole design is first transferred on the leather by a piece of cotton which has been placed in charcoal dust. Holes on the leather paper which have been created around the design after sticking real leather by paste and gum next to each other by means of small brushes. After colouring, different parts of the design are trimmed and prepared just like a painting.