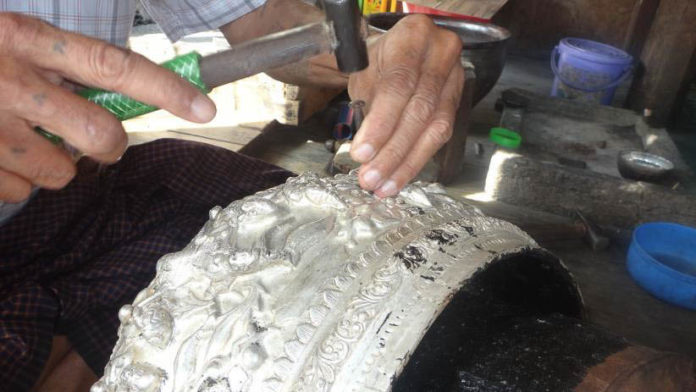 In Myanmar, the traditional arts of gold and silver smithing are known as pandain; they are considered to be one of the country’s ten traditional arts. Precious metalwork is one of the oldest Myanmar crafts, dating back to pre-Bagan times. Artistic pyu silverware was discovered in the mounds of the old shrines of Srikshetra. When King Anawrahta of Bagan brought the relics of Buddha and Buddhist scriptures to Bagan from the Mon capital Suvunna Boumi, various gold and silver artifacts were included. Jewellery, bowls, plates, utensils and religious item such as Buddha sculptures are just some of the items fashioned by Myanmar’s skilled craftspersons. Some of the most treasured items are large bowls intricately decorated with scenes from Buddhist mythology or Myanmar’s history. Because of their use on auspicious occasions, the bowls are made from the highest-quality silver, known as ngwe-zin-baw-phyu. This 95% pure silver requires the addition of small quantities of copper to strengthen the items fashioned from it. The beautiful and valuable bowls are only used on such occasions as a wedding or an ear-piercing ceremony.

To create their wares, craftspersons melt down silver and brass to create an alloy. The mixture is shaped into ingots, which are then hammered into the desired shape. The most “technologically-advanced” piece of equipment that is used may be an occasional gas-fired soldering iron sometimes used to join silver pieces together. If the item is to be decorated, designs are pencilled onto the surface. The piece is then filled and coated with sealing wax to protect it and help keep its shape while designs are embossed with an awl and chisel. This protective coating can later be melted away and reused. After all of the pounding, tapping, gouging, and scratching, vigorous scrubbing and polishing bring out the lustre.

Among the many craftspeople to be found around and on Inle Lake in Myanmar’s Shan State are the silversmiths of Ywama village. Some of the traditional workshops run by native Intha people are located in stilt homes built directly on the lake.