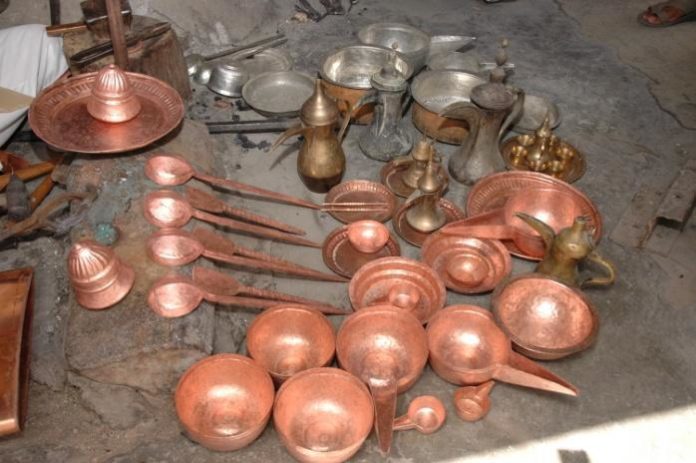 Metal smelting techniques were known in the ancient Near East. Metalworks in Oman included copper and iron. The antiquities discovered in ancient Omani sites in Wadi Aljizi (a border crossing between Oman and the United Arab Emirates), Massira Island (located off the East coast of mainland Oman and is the largest island of Oman) and other locations proved that the Omanis were acquainted with mining, especially copper mining, and that they were skilled in making weapons and other different tools they needed in their daily lives. More than sixty copper mines and products produced were also found in different places in the mountains of Oman. Both the blacksmith and brass polisher share similar tools, such as fire, bellows and hammering tools. (Hamdi Sarray: 2005:180-181).

There are many convincing indications that copper mining in Oman has been practised since very early times. Copper was smelted in the hills and Jebals of the interior and formed the basis of Oman’s metal-crafting industry dating from the third millennium BC. With a copper-working history at least 5000 years old, the inhabitants of Magan (the name for Oman at that time), were among the earliest people in the world to practice the art of smelting. Copper work laid the foundation of all subsequent forms of metallurgy. It is thought that these people traded copper as far afield as Mesopotamia and the Indus Valley, both overland and across the calm, shallow waters of the Persian Gulf (Hamdi Sarry:2005:181).

The person practising such industries is known in some Arab countries and Oman as a brassmith. Most of the products made for centuries until now are the same. The famous uses for copper which are still used in Oman today are bowls, plates, coffee pots, and various utensils, generally decorated with simple geometric design or more elaborate vegetation patterns, again showing Indian and Persian influences (Calvin H. Allen Jr :1987:17).

products made of Copper

Blacksmithing is a craft that has been known and practised since very early times as well. At the beginning, it was connected with hunting, self-defense and agriculture. That made blacksmithing one of the most widespread crafts in Oman as its products are in high demand in both rural and urban areas and a lot of iron products were found in different parts of Oman (Public Authority of Crafts industries: 2014:99)

In the field of agriculture, for instance, many tools were produced for various purposes, such as almikhlab which is used for harvesting dates, sickles (al magas, which are curved knives), al makada (a drill), saws, shovels, and al jarz (handles). This craft has flourished in Oman due to the availability of iron as well as the blacksmiths who are usually closely connected with other craftsmen as they are typically the main suppliers of their needs (Abdulla Al-Harthy, 2000:217). 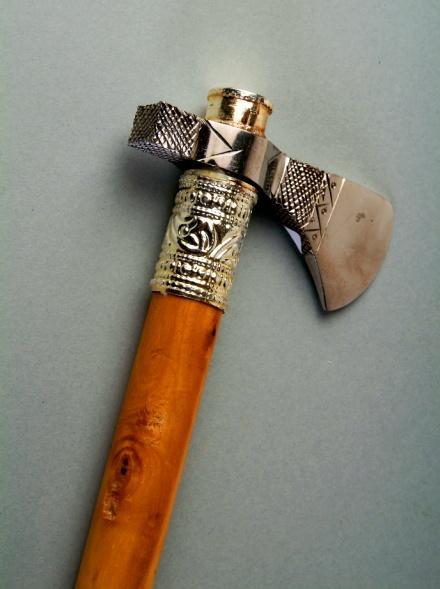 Today, iron has been discovered in many parts of Oman and blacksmithing still has an important role in preserving and reviving the traditional craft industry in the form of finely made swords and khanjars all over the Sultanate. Nizwa (the main town in the interior province with a popular souk that sells copper and silver jewellery) served as the centre of this industry, with Bahla and Muttrah coming second. Also, we can find this craft in Sohar (is the capital and largest city of the Al Batinah North Governorate in the Sultanate of Oman), Ibra, Alkamil (one of the Ash Sharqiyah region cities) and Barka (Public Authority of Crafts industries :2014:98)

Blacksmiths have used three kinds of iron in Oman: al fora or al mas, steel and al narm. Each of these has been used for a particular purpose. Al fora is used for making cutting tools, such as khanjar blades, swords, knives, saws and scissors. The second one is used for making anvils, hammers, planes, al haib and bakt for cutting al falaj (water that runs through a channel dug in the earth) canals. Al narm is used for making al tobi amber heater miskhan al gamr and roasters (Public Authority of Crafts industries: 2014:100)