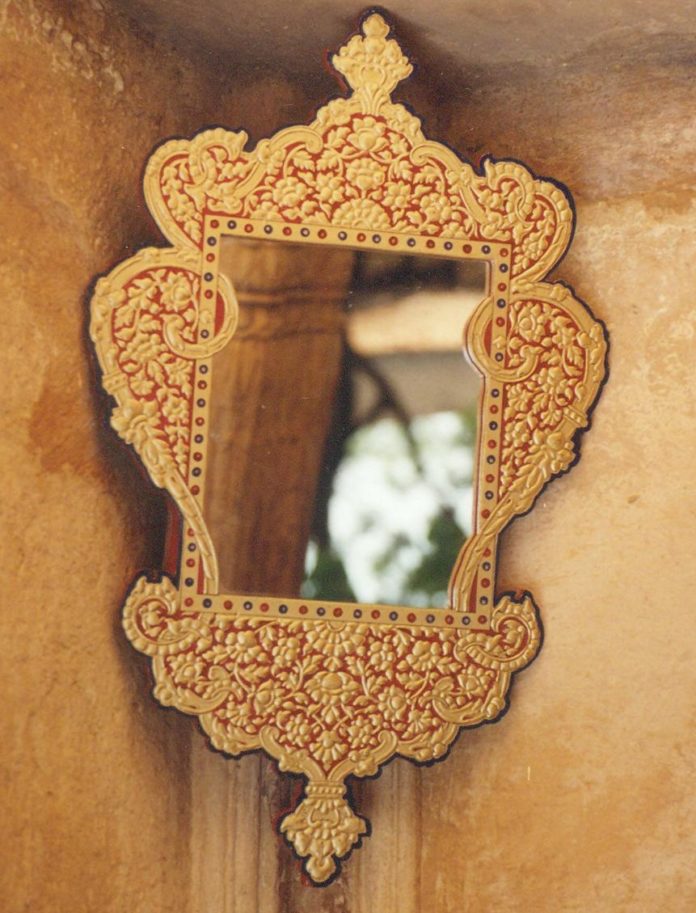 The Usta community were part of the great migration of artist and craftspeople to the courts of the great Mughals. Later invited to settle in Bikaner by Raja Rai Singh (1541-1612), their architectural craft of Usta Kaam embellished the interior walls of the Anup Mahal palace in the Junagarh Fort and other royal homes. The craft is an amalgam of two forms of decoration—manoti, an embossed high relief technique practiced on a flat surface and naqqashi, the jewel like gesso painting on the manoti. With the advent of the British and their interest in objects for “back home”, the Usta community adapted their craft from architectural interiors to designing products. 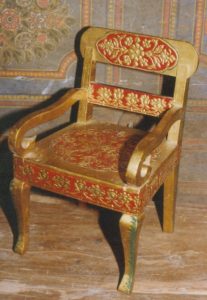 The base of the art became the camel hide mould made by the Dapgar community of leather craftsmen, who processed untreated raw camel leather and moulded it to the requirement of the Ustas. Easily exportable objects from saddles for camels and horses, water carriers, decorative items like photo frames, vases, mirror frames and boxes were now embellished with Usta Kaam. The Usta artists patterned the the thick paste of the manoti in high-relief on the surface of the leather mould. Once hardened, the naqqashi process, with its jewel-like tones of ruby red, emerald green, sapphire blue and gold that form the colour palette, were painted on. Designs from geometric and floral patterns, birds and animals, to miniature paintings with scenes of myth and history were depicted. They were decorated with elaborate borders that were painted to fit the silhouette. 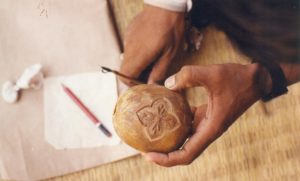 The Usta community have in the past few decades re-established their link to interior architectural projects working now in luxury residences, hotels and places of worship. Additionally, they shifted their base material to wood and stone for the decorative objects. It is the Dapgar camel leather mould makers who now have little or no work, as their link to the Ustas is weakening and the demand for moulded objects on the decline.