Wanchojang refers to the craft of making receptacles with sedge, a rush-like plant with a one or two year life span that is grown in rice paddies and swampy ground. It grows to between 60-200mm in height and is called wancho, yongsucho, and seeksyongcho. It is found mostly in the Gwanghwado area.

Wanchojang is made either by machine or hand. The “close” machine technique is predominantly used for mats. The “sparse” hand technique produces boxes, bowls and baskets. Ganghwado Island is known as the home of wanchojang woven by hand.

Sedge is planted in April and then transplanted into rice fields in early May. It is then harvested in late summer, during July and August. The stalks are cut into strands and dried. When they turn bluish, they are then soaked in water and left to dry in the sun. This process is repeated five or six times before they eventually turn white, and ready for use.

The sedge products are usually round, such as kkotbangseok and kkotsamhap,These are constructed by weaving together horizontal (naljul) and vertical lines (ssijul) strands into a frame (no). Once the base has been completed, vertical strands are added to reinforced the sides (samori). This includes the tteumjil process, when decorative characters and designs can be incorporated. It is in tteumjil that the mastery of wanchojang is demonstrated. Products are often adorned with the Chinese characters for good luck and prosperity. 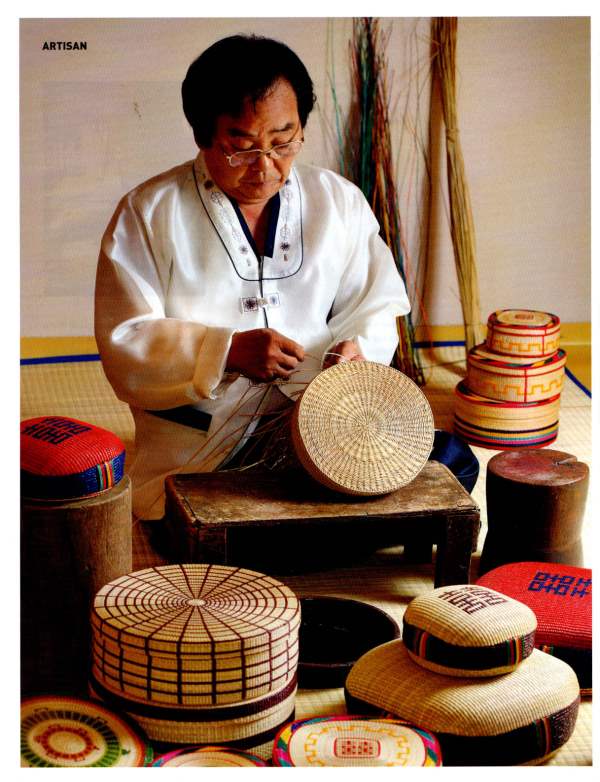 Wanchojang is a traditional element of weddings. In the pyebaek wedding ritual, a bride bows deeply to greet her new parents-in-law just after getting married. Pyebaek dongguri is used by the bride to present foodstuffs that she had prepared to her in-laws in a traditional round container. In everyday life, their air circulation makes them good to store food in summer, while offering insulation in winter.

Yi Sangjae was designated in 1996 along with his craft of Wanchojang as an Important Intangible Cultural Asset. He grew up on Ganghwado Island and first learnt this craft from his mother. He went on to make traditional items, such as dongguri (box with cover for the storage or transport of food), sajuham (container for presenting a document with the year, month, date, and time of the groom’s birthday to the bride’s family so that they could decide on an auspicious date for the wedding ceremony), and banjitgori (container for sewing materials, such as needles and thread. Yi, along with the art of wanchojang itself, was designated in 1996 as an Important Intangible Cultural Asset.