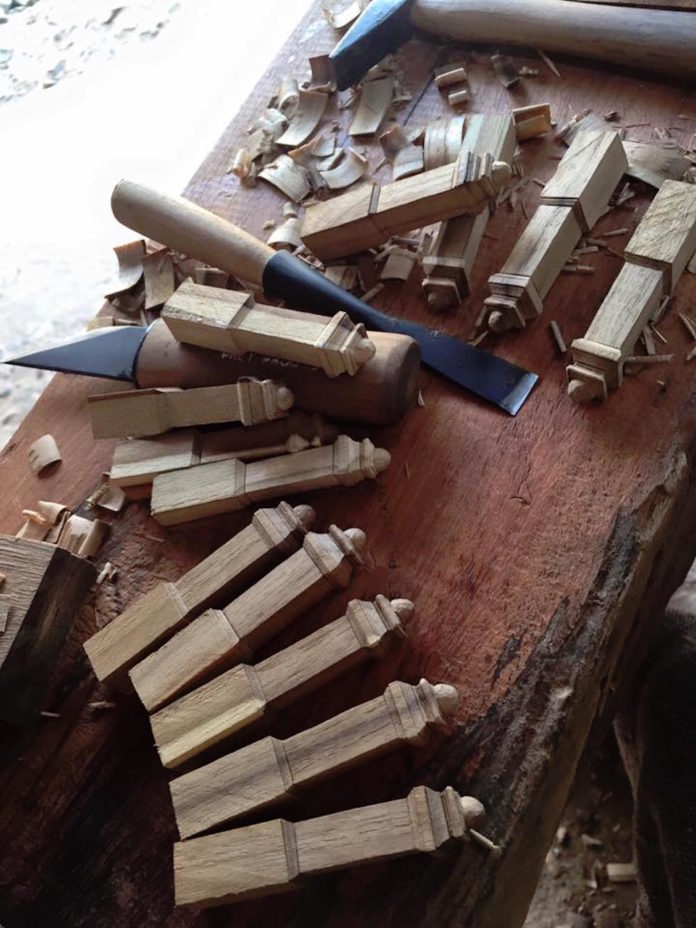 Men are responsible for crafting wood in Laos. They carve wood into utilitarian as well as religious items. Weaving equipment, including shuttles and looms, and Buddha images, for example are produced from this material using handtools such as different types of saws and chisels. Mahogany, pine, rosewood and teak grow readily in Laos’ forest and are popular mediums for woodcarving.

In the past, all domiciles, including the Laos royal palace and Buddhist monks’ quarters or kuti, were wood structures. In many rural areas, houses and some Buddhist temples are composed of wood. Balustrades are decoratively cut, and roof pediments may be carved into figures and painted. A canoe or long-tailed boat is carved from a single log. Boat races are held annually throughout the country to honour guardian spirits. 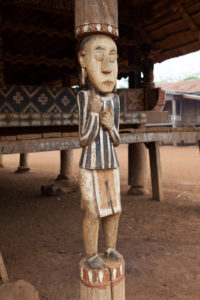 Some artisans specialise in Buddhist sculptures. Laypeople commissioned Buddha images (phaphutthahoop) for their home altars and as offerings to temples. Besides individual creativity, certain style are associated with ethnicity, such as Tai Lue, and kingdom, including Lan Xang.

Non-Buddhists groups also utilise woodcarving to adorn domiciles, ritual buildings and statues. Some villages of the Katu group residing in South Laos construct a communal house (sala kuan). In the past, men consulted ancestors and other spirits. Presently, important guests are received here and cultural performances take place in front of the hall. Images of forest animals, humans and supernatural beings are carved into the exterior and interior pillars. Freestanding sculptures of animals and the founding parents sit high in the structure as a sign of respect. The Ta-oi, another ethnic group residing in the southern region of Laos, produce masks and statues, ritual items in the past and trays for cooling sticky rice and other cooking utensils.

With the growth of tourism, artisans have begun to carve other products. The former kingdom of Laos was called Lan Xang, or lands of one million elephants, and both wild and domesticated animals live in Laos. Pachyderm wood statues are created a various sizes. Woodcarvers also create hangers for textiles. These accessories are incised with patterns of flowering vines, elephants, and mythical creatures.

Besides individuals and families producing woodcarvings, entire villages are renowned for their products and skills. Ban Nong Bueng is a Ta-oi village in Pakse Province open to visitors interested in purchasing directly from the producers and to observe the process. Sandra Yuck opened Caruso Lao in 1998 and employs a group of carvers and turners to create new Buddha images, jewellery, and interior decoration from indigenous woods.