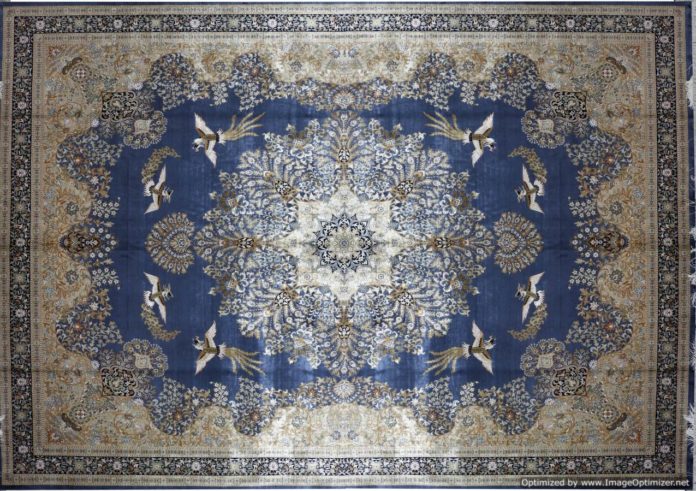 Carpet weaving is done either manually or mechanically. Machine-woven carpets are primarily for practical domestic use. Hand-made ones are mostly for ornamental purpose, with patterns featuring abstract expressions based on real-life mountains, waters, sunrises, oceans, birds, beasts, etc. The craftsmanship of carpet weaving is mainly embodied in pattern design.

The Chinese carpet design is based on the ideas of the famous paintings, legends, the Bible etc. For example, in the design of “Guava, Buddha’s Hand & Peach”, the guava stands for many children and the peach for longevity, whereas Buddha’s hand implies the blessings and good fortune. After the design is completed, it will then be enlarged into a blueprint and marked with colours in different columns for the weavers to follow.

The silk thread needs to be dyed before it’s woven into the carpet. Previously, the pigment was usually taken from the natural plant and the mineral materials. With the traditional dyeing processes, the silk adhered closely with the pigments under the normal temperature and thus gives a good protection for the layer of the silk. Nowadays, chemical pigments are often used to increase the colour diversity.

Warps are fixed on the loom, almost like a standing frame, which consists of four bars. The warps are looped tightly between the top bar and the bottom one. The density of the warps is the key to the quality of the carpet and with more warps, the design looks more clear and vivid Accordingly, this requires more work.

Based on different blueprints, the weaving of a carpet is understood as combination of threads of a basis and a wefts and knots installed in this cloth base. The warp yarns are fixed on the loom and starting from the bottom, the weaving gets under way. The weaver takes a piece of carefully selected fibre, such as wool or silk, to form a knot on two warps corresponding with the designs and colours in the picture. The surplus fiber is cut off with a knife. After a row of knotting is completed, the weaver passes one or several weft yarns in between the front and back warps. Then the weaver will use a special comb to beat forcefully on the row of knots and weft, in order to keep them tight and make the carpet even.

The creative team draws and produces a sample draft according to artistic requirements and personal will, then makes the carpets using appropriate weaving method such as the 8 according to the size and colour mix of the draft design. Domestically, artisans engaged in this creative work, by style of their works, may be grouped into two categories: experts working for arts and crafts schools, and professionals working in the industry.

The shearing process starts right after the completion of the weaving. The worker shears away any additional fibers on the surface to achieve the positions, depth and angles as reflected on the blueprints, and then get the edge knotted to complete the whole manufacturing processes.

Lin Lecheng, Professor of Tsinghua University, is an expert in hand-made carpet and tapestry weaving. Works produced by his studio are  modern with a strong sense of design. A large number of carpet weaving professionals can be found in Shandong Province, Tianjin, Hebei Province and Beijing, among other places. Li Linpan, Liu Jiafu, Cui Xueshan from Tianjin, Wang Delun from Shandong, and Tai Changgeng and Zhang Deli from Hebei, are all national masters in this field. Works created by professionals are relatively more traditional, with patterns mostly featuring flowers and human figures.