By the end of the XIX century carpet weaving craft in Uzbekistan was transformed from a local craft for domestic use into a profitable trade. Uzbek carpets are distinguished by three different techniques: high-pile, short-pile and no pile rugs. Carpet makers weave various piled floor rugs, woollen stripes (kur), baskur to tighten the carcase of the yurt, woven pileless carpets (gadjari, kohma, terme, and takyr gilyam), diverse storage bags (sometimes used to sit upon) (napramach) and travel bags (hurjun).

Amongst most popular pile products were carpets from Andijan and Samarkand in addition to interior decorations for Karakalpak yurts. The central field of Andijan carpets is decorated by the repeated cross-shaped motif where the main border ornament resembles the “wave”. One of the most authentic Samarkand carpets was a loosely high pile woven carpet called julhirs (bear’s fur). Such carpets had a long shape and were often woven with a pattern of longitudinal stripes. According to their unique creative features, some products could be categorised under the same group of pile-free carpets made by Uzbek tribes who lived in Jizzakh region. The style of product is very similar to those made by Uzbek tribes called kungrats, who mainly lived in Baysun town of Surkhandarya region, and also Dehkanabad and Kashkadarya regions. The carpets made in these regions are characterized by the more complicated designs called gadjari, terma, kohma takyr gilyam and others. The most striking carpets are considered to be the oq enli rugs that are woven in a mixed technique of embroidery and carpet weaving. The unique school of carpet weaving, production of which is known as Arabi gilyam, was formed on the territory of Kashkadarya region by the Arab descendants who settled in this area in the VIII-XVI centuries.

Currently, the art of carpet-weaving is blossoming in Khorezm, Samarkand, Urgut, Nurata, the Ferghana Valley, Kashkadarya and Surkhandarya regions. Folk artists are creating new carpets, borrowing and reviving the long tradition of carpets weaving from the past. Manufacturing of silk carpets was established in a few cities of Uzbekistan during the period of its independence and became a new phenomenon in the national carpet weaving. 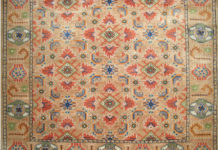 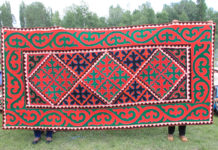