Chii is a tall, stiff, reed type steppe grass, with thin and dense, as if polished, stems. Various items made from it, which were widely used in the nomadic life of Kyrgyz people, were also called chii. Products from chii are widely used in the daily life of rural population. A mat of chii is placed in the wind as a barrier near the hearth or next to drying wool. As a kind of mold, it is used in the manufacture of shyrdak and ala-kiiz rugs and carpets. Chii grows up to 1.5 meters in height. The season of its harvesting as raw material is September. Chii is indispensable in manufacturing of parts of the yurt: its walls (chii kanat), the basis for the felt door cover (eshik chii), the kitchen screen (chygdan or ashkana chii). 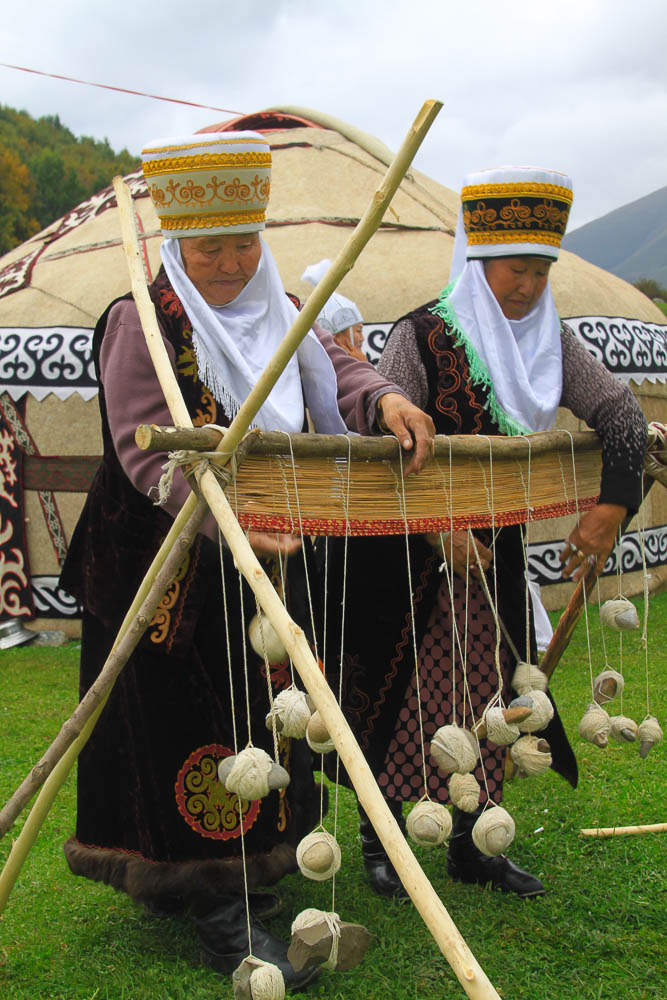 Kanat chii girdles the yurt along the entire perimeter, insulating and decorating it. It is ornamented with wool of different colors, or with a large pattern. Long basis for the felt door of the yurt is woven from chii and firmly attached to the round shaped dome of the yurt (tunduk).

Ashkana chii screen fences part of the yurt (to the left of the entrance), where food is stored and kitchen utensils are placed. There are several types of ornamental compositions of the ashkana chii screens. This feature the use of diagonal symmetry of colours, red, white and blue. By composition and style of the ornament, the screens of ashkana chii resemble woven pile carpets. Chii is also used in kitchen utensils, protective packaging for porcelain dishes (chyny kap) and mat for drying cheese.

Chii is woven on a primitive machine, which is a wooden structure on two legs and with two horizontal bars. Before weaving, the masters mark each chii with needle, laying the pattern. Then each chii stem is individually braided with wool of different colors and connected to the other on the machine.

To hold stems of chii together, weights are attached to woolen threads and fixed by a loop. The length of threads should be four times longer than the expected length of the mat. Then threads are placed across the crossbar at a distance of 20-25 cm from each other. The stems of wool-braided chii are placed one at a time on the crossbar with threads, after which threads are thrown to the opposite side. And this continues until the reed screen is ready or whole picture is formed.

The weaving of patterned chii items requires great skill, patience and perseverance. The complexity of the process of making patterned chii is due to the requirement that each stem is braided with coloured wool separately and connected to other stems later. Due to this, the master keeps the final composition and all elements of the pattern in mind.