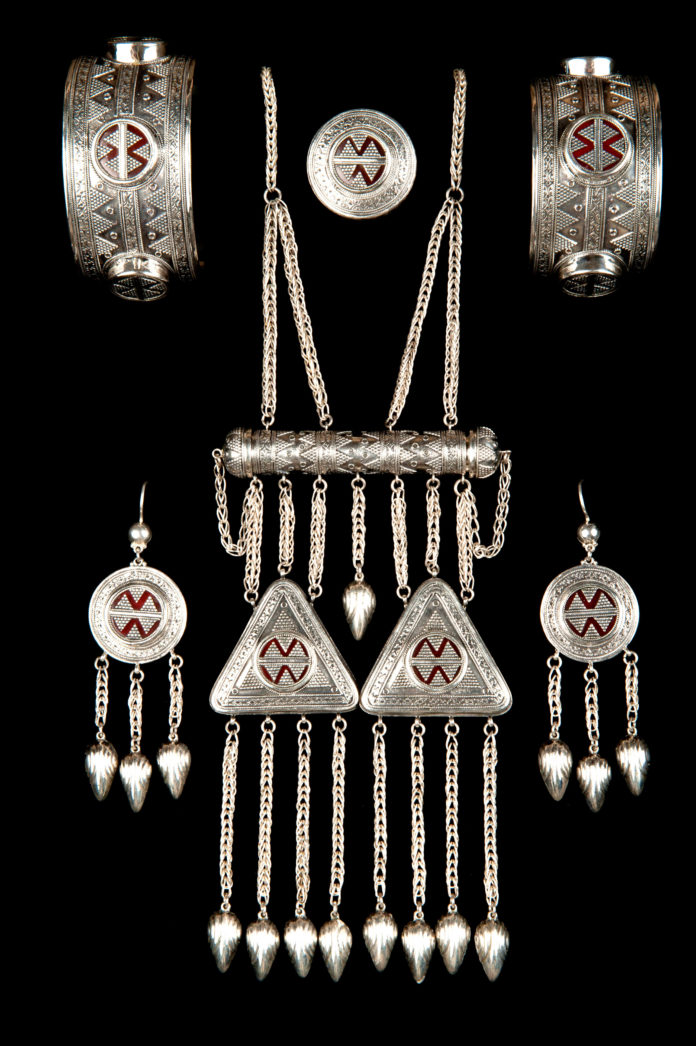 Zergerlyk is a traditional Kazakh art of jewellery making. This art is transferred through generations from father to son, from master to journeyman. Each zerger (jewellery artist) works on its own. Zergerlyk is considered a professional art.

Archeological findings suggest that Kazakh people achieved a higher level in the development of jewellery making. Chylik findings were made using such techniques as stamping, engraving, true grain, incrustation (VII-V century BC); Issyk finding included “Golden warrior” (IV-III century BC); Berel kurgan findings (IV-VI century BC) from Eastern Kazakhstan are the testimony of a unique “animal style” in jewellery making.

The jewellery pieces in the form of circle, oval, triangle, half oval, rectangular, petal, peak and beak are frequently combined to make a larger piece, for example pectoral decorative items onzhyrek and alkah are made of several triangle and rectangular plates, khudaghy zhuzik (a special large double ring presented when marriage brokerage occurs) and bes-blezyk (a bracelet connected with chains with three rings).

Geometric style from Western Kazakhstan is famous for large-scale decorative items that are assembled from pre-made pieces that are joined together by soldering (plates, borders, solar symbols, grain). Most common techniques include true grain, plated filigree, stamping, embossing, engraving, niello, enamel, casting, forging, and incrustation with precious and semi-precious stones. Stone (tas) are sliced flat and are called koz (eye) as they considered to be protection charms. The most popular stone is cornelian (akhykh) as it symbolizes prosperity and joy.

Silver decorative items accompany Kazakh people for the whole life from the moment they are born till the day they leave this world. Wearing silver bracelets and rings was required when women were cooking. As well, traditional jewellery plays an important role in Kazakh society as it helps to immediately recognise the status of a person (young woman, engaged woman, married, parents with children that not married, parents with married children, ruler, shaman or other).