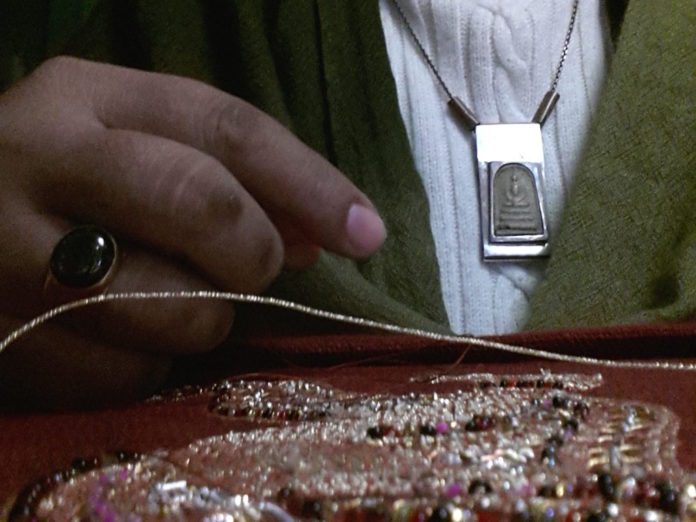 Prior to 1975, the monarchy and nobility of Laos were patrons of the arts, and women of the court couched and embroidered clothing and ceremonial items using threads composed of metal, such as silver and gold alloys. They placed metal wrapped threads in specific shapes on a silk fabric, handwoven or imported from China, and tacked the threads down with minute stitches. Hollow pieces of metal were inserted on a thread that was stitched to a cloth to create designs. 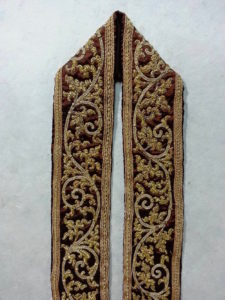 It is unknown when this type of post-weaving adornment, known as kaan pak tin in Lao, was introduced into Laos. Other courts located in the region that held marital alliances with the Lao royalty, such as Lanna (present-day North Thailand) and Sipsong Panna (present-day Southwest China or Yunnan), also produced similar embroidery. Chinese and Indian textiles were imported into Laos so it is possible that both could be inspirations for this artistic tradition.

Many of the motifs emulate other arts sponsored by the Lao elite. Stencilling created with gold leaf that adorns Buddhist temples of Luang Phabang was one source of inspiration. Some of these motifs are Chinese auspicious symbols, such as the bat.

After the Communist Revolution of 1975, the Lao monarchy was abolished. The art of couching and embroidery with metal threads (pak also refers to embroidery in Lao) declined along with other arts associated with this class. Approximately ten years later, restrictions regarding dress relaxed, and it became common for a bride and groom to wear royal-style clothing on their wedding day, since they were king and queen for that day. Unwritten rules restricted the use of some designs to the highest members of the royal family, but these were no longer applied during this new era.

Presently, the production of this art has expanded. Women of all classes and ethnicity carry out royal-style embroidery. Hmong women in rural villages produce examples for markets throughout the country. Women wear this material for all types of special occasions, not only weddings.

One member of the former Lao royal family, Tiao David Nithakong Somsanith (Tiao Nith or Prince Nith), perseveres and continues the art of gold couching. This artist is unusual since he is male. He learned the art from his grandmother, the queen, as a child. Tiao Nith applies couched embroidery using threads and materials imported from France to traditional garments, such as the collar of blouses and the traditional skirt, or sin. He also creates large installations that have been exhibited internationally. Tiao Nith presently lives in Luang Phabang, teaching new generations the arts once supported by his ancestors.