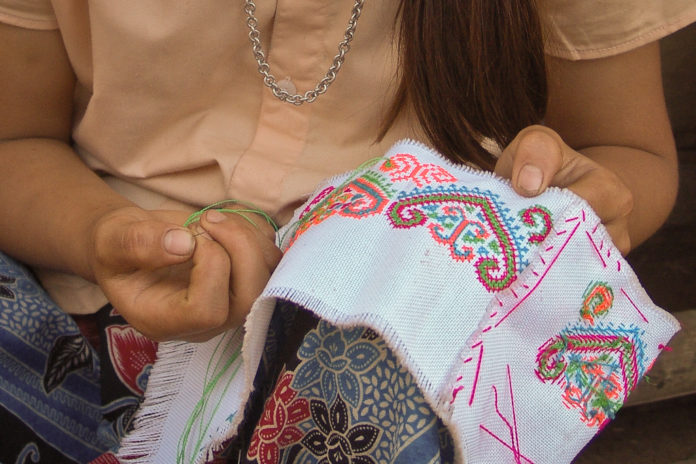 Women belonging to various ethnic groups composing the population of Laos adorn cloth with post-weaving techniques, mainly appliqué and embroidery (pak saew). Cross-, satin-, and weave-stitch are frequently used to decorate ceremonial garments and other items. Appliqué and reverse appliqué are applied in conjunction with embroidery. 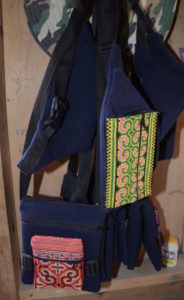 Ethnic groups residing in Northern Laos who utilise these post-weaving decorative methods include the Akha, Hmong, Iu Mien or Yao, Khmu, Kim Mun or Lanten, ad Lahu. In some cases, an artisan cultivates raw materials to later process into thread and cloth. Hmong women grow hemp while Akha, Iu Mien, and Kim Mun females tend cotton. In the past, neighbouring Tai subgroups supplied silk threads, but silk and synthetic yarns are readily available in the local markets. Many weavers from these groups dye their woven cloth with indigo, and the name Lanten refers to indigo people in a Chinese dialect. Non-weaving peoples such as some Khmu subgroups traded for textiles and later embellished them with embroidery and appliqué.

Women from Lao and related Tai groups also employ embroidery to decorate clothing and other types of textiles. Tai Dam ladies began to embroider their head coverings because this technique is mobile; it can be applied while taking a break from working in the fields or selling items at the market. Tai Lue women appliqué different coloured fabric to the cuffs, neckline, and bottom edge of their blouses. Females of noble or royal standing couched metal wrapped threads (pak tin) to adorn upper and lower garments as well as straps to alms bowls and banners donated to Buddhist temples. Presently, court-style clothing is popular for weddings, and this demand has allowed women from different classes and ethnicities to produce examples commercially. 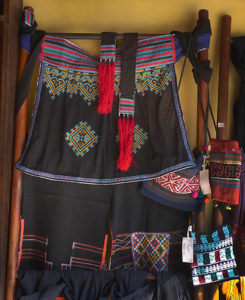 Ceremonial clothing of different ethnic groups continues to play important roles in society. In Laos, individuals, both the young and old wear, wear ethnic identity markers for New Year’s Celebrations and other festivals. Diaspora of various groups commissions attire from artisans living in Laos. Mrs. Fam Joy, a Iu Mien woman from Muang Sing of Luang Nam Tha Province, receives orders for garments decorated with cross-stitching from Thailand and the United States. The Handicraft Market occurring nightly in Luang Prabang, the former royal capital of the Lao kingdom of Lan Xang and a present-day UNESCO World Heritage Site, offers a wide range of Hmong embroidery, such as story cloths, for sale. These pictorial scenes were born in the refugee camps of Thailand where many Hmong were sent after Laos’ 1975 Communist Revolution.