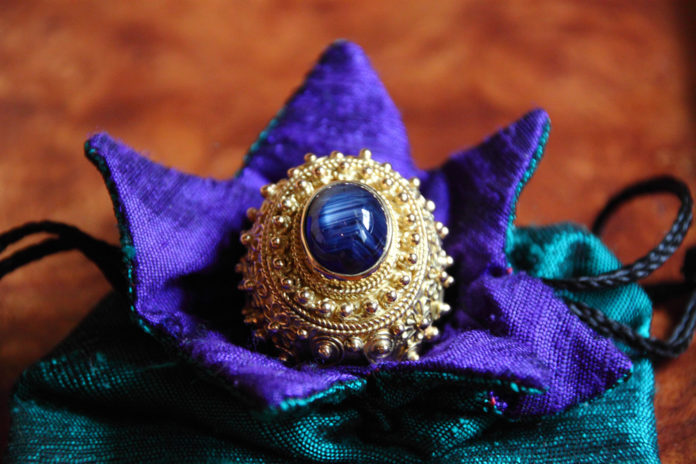 A wide range of smithing occurs in Laos to produce tools, jewellery and religious items. Blacksmiths (Lao: saang tii lek) may come from a wide range of ethnic backgrounds such as Khmu, Lao, and other groups. An individual in a village, or a community of smiths, produces items to sell in the village or a nearby market. Others are itinerant, travelling from one settlement to another to ply their trade. Production of tools, such as knives of different sizes, is still active. In the past, they also forged blades for swords (daap) that were used as weapons or as part of ritual. Blacksmiths utilise casting to create weights for fishing nets, and this method is also applied to form Buddhist temple bells. 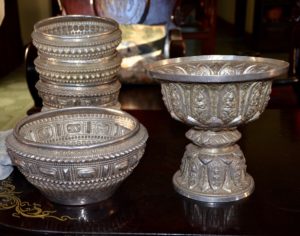 Silver bars used as currency in the region of Laos and Southwest China were smelted to produce ornaments. The piaster introduced into Laos when the country was a part of the French colony of Indochina had a high silver content and became the preferred source of material. Gold is abundant in Laos, and many people continue to pan for gold. If a smith is commissioned to create new jewellery, the customer often supplies the materials, either coins or pieces of old jewellery. 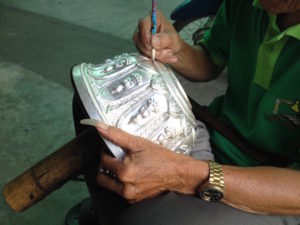 Women wear belts composed of linked ornaments created with open filigree with the traditional skirt or sin. The clasp is often embossed with floral patterns. The flower associated with the Lao royal court is the phikun flower, and its depiction adorns various jewellery accessories. It is thought to bestow longevity on the wearer.

Silversmiths also created ceremonial items. Betel quid chewing was a favourite pastime in Laos, and the presentation of betel occurred when receiving important guests. To propose for a woman’s hand in marriage, the groom’s party visits the bride’s family with a set of containers (khan maak) that hold ingredients for betel quid. Silver sets continue to be popular. Ones accented with gold were used exclusively for sacred royal ceremonies. The elite also carry silver bowls for presenting offerings for morning alms. These vessels are essential to the Lao blessing ceremony known as basii or su khwan. Repoussé technique forms the patterning inspired by Hindu-Buddhist arts and Lao legends decorating these ceremonial items.

Presently, smiths in Xieng Khouang Province are recycling metal leftover from the Vietnam War to create spoons, pendants, and souvenirs. Missile casings are not uncommon. These products are a reminder of the dangers local citizens carrying out daily activities such as farming. Over two million tons of bombs were dropped on Laos in this tragic war.

Traditional jewellery and almsgiving bowls are available for purchase in local markets and generations-old shops. Some private businesses, such as Hoi Sang, whose atelier is located in Luang Prabang, are committed to preserving traditional jewellery styles, providing equipment and training to new craftsmen.