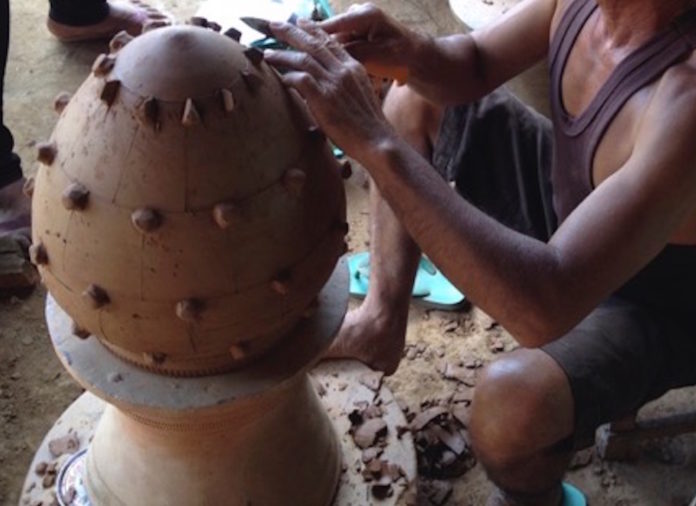 The production of ceramics (kheuang pan din phao) occurs throughout Laos. Artisans create both glazed and and unglazed pottery. Members of the Lao and related Tai ethnic groups are responsible for making decorative and utilitarian items. In the past, women produced kitchen utensils, including such as jars (hai) and mortars (khok), but presently all members of the family shape jars to store fermented fish, rice alcohol, and water. The ceramic vessels keep water cool, and some households continue to place a covered jar full of water at their front gate for passersby to quench their thirst. Clay is also moulded into animal figures to serve as toys (tuk taa). 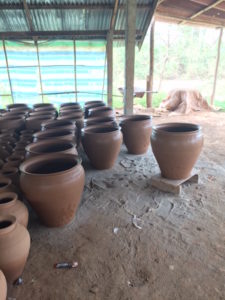 China is considered to be the source of the firing technology utilised in Laos, but it is possible that this knowledge came to the ancestors of the Lao and Tai independently. One firing method that has been used for thousands of years is the use of bonfires to produce earthenware. Covering the previously dried, shaped clay, rice hay or other flammable material is lit. The final product is earthenware.

An early kiln (tao phao) is a cross-draft type, which was used over 1,000 years ago in Laos. This kiln consists of an oval hole dug into a riverbank or slope, forming a single compartment. Another kind of kiln, which was introduced two hundred years later or 800 years ago, is composed of clay slab walls. It is built on flat ground, allowing for easy loading and unloading of pottery. A more advanced kiln is built of brick. These later kilns are also cross-draft kilns with multiple compartments, such as a fire chamber and a firing compartment. 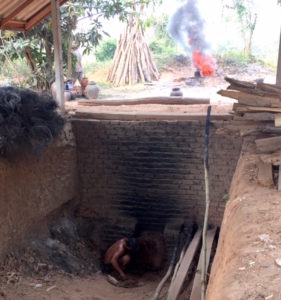 The clay originates from the potter’s surrounding environment and is sometimes mixed ground quartz. The craftsperson shapes the clay (pan din) and fires it on (phao din) site to create high temperature-fired earthenware, stoneware, and glazed ware.

Many of the glazed ceramics produced in Laos have ribbed or fluted exteriors. Glazed ceramic in the shape of stem bowls have been collected at the Sisattanak Kiln Site located in Vientiane, the national capital located in Central Laos off the Mekong River. Discovered in 1970, this kiln dates to the 15-17th centuries, but it is assumed to be older. The archaeological remains include architectural decorations, domestic utensils, and pipes. 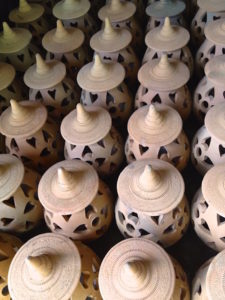 Decoration to glazed ceramics includes simple incisions, stamps, and fluting. The glaze ranges from light green to olive green and different shades of brown. Unglazed pottery lack adornment, such incisions or stamps that decorate other Southeast Asian wares. In Tha Hin and other pottery-making villages, wood ash is rubbed onto pottery before firing.

Some villages specialise in pottery, such as Ban Chan of Luang Prabang Province, Ban Tha Hin of Attapeu Province, and Phakaya Village of Vientiane Province. The potter’s wheel has been introduced, and current products have expanded to include lampshades and tiles. Some jars have transformed into flowerpots, and many citizens continue to use clay jars and mortars in the kitchen.