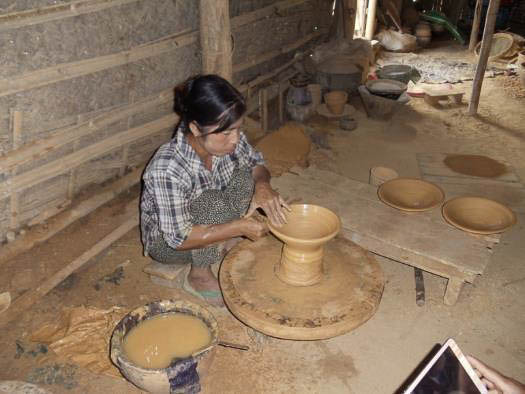 The town of Moattama was first mentioned in an old Burmese inscription of 1326 where it is called Muttama, the name which until now is often used by Myanmar. Ceramic trade 13th-17th century Moattama and Myeik, harbours on the coastal region, might have been important links in the ceramic trade between China and India during the Song Dynasty (907-1279 AD), and possibly also in the ceramic trade with Southeast Asia through Malacca. Song ceramics have been found in the Tanintharyi area and from shipwrecks offshore.

Pottery, earthenware as well as glazed, is still in common use in households in Myanmar households.  Most are in the forms of cooking pots, flower pots, drinking water pots and storage pots. Storage pots are mostly glazed and used to store water, oil, fish paste, salt and various pickled food. Drinking water from a river, a well or a bore or from rainfalls is filled into the large water storage pots, especially in the dry zones (Central Myanmar).

The first step in pottery is blending the different grades of clay. These workers manually step on and off the clay for a couple of hours. The second step is to mould the raw pot.  Many potters in Burma still utilise a kickwheel or hand-turned wheel.  The potter puts a certain amount of raw clay on the kick wheel and tries to get the shape she wants by one hand while turning the base by another hand or by feet. This particular step is called trimming, where the potter uses a wooden paddle to beat the pots to smooth and make it thinner. A small clay tool called an anvil is held inside the pot so it does not collapse. The anvil is dipped in the sand now and again so it does not stick to the inside of the pot. Followed trimming is another detailing step called engraving.  The potter masterfully put the shapes or lines or even flowery engravings using the series of different tools (paddles). The drying process is just a simple step.  The pots are exposed to the ambient room temperature to occur the dehydration of the moisture in the raw clay. The pots are fired in an open area, with wood, grass and possibly old broken pots piled around them.  It is to make the pots free from water and moisture content. This final step is called finishing or baking.  The potters bake the pots inside a kiln.  It is a cross-draft kiln, beehive-shaped with a domed roof, made of unfired bricks and mud with a sloping floor. There is no division between the fire and firing chamber.  The kiln is supported at each side by a high brick wall and each is protected by a bamboo roof. The baking temperature is probably about 1,000°C.

Kyaut Taing is famous for its underground kilns. Pits are dug into the earth, with smoke holes and screens protecting the kiln from the wind. Steps are built at the entrance of the underground kilns, allowing potters to carry stacks of pots in and out as they work.

Pottery is a popular craft because it is used in everyday life such as cooking pots, flower pots, drinking water pots and storage pots. While people in villages in Myanmar may also use some metal pots for cooking, the majority still use ceramic kitchenware because of the flavour that results. There are several areas Myanmar that are specially connected to pottery making including Kyaut Taing, Twante, Sagaing, Shwe Nyein and Shwebo region.