Pottery is the most widespread craft in Sri Lanka due to the utility value of clay-pots as basic household objects. Potters who traditionally occupied a lower rank in the social hierarchy were settled on land-grants by ancient kings in certain villages where good-quality clays were easily available. Some of their descendants still continue the craft at house-workshops producing household pottery for cooking and food preparation. 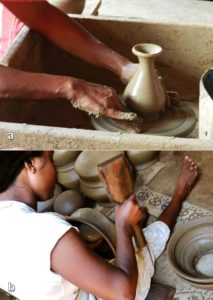 Modern pottery making is not confined to the traditional potters’ villages or those who belong to their caste. Those with creative skills and dexterity have entered the craft to produce clay objects that appeal to modern taste and new uses. They include cut-work objects such as lamp-shades, garden pots, decorative pots, decorative wall-plaques, glazed and unglazed ornamental pottery, plant holders, flower pots, studio pottery, and many other ornaments objects.

Traditional hand-driven or peddled wheel is used to make cooking pots with rounded shapes at house-workshops that run as cottage industries. Small-industry level workshops use power-driven machines for clay processing. Moulds are used to produce non-rounded type vessels such as flower pots, plant-holders, wall plaques, and ornamental objects. Large objects like garden pots are “constructed” by placing rolls of clay in the form of a coil until the desired shape and size are obtained. Several types of kilns are used for firing. Those workshops produce only terracotta, earthenware, and stoneware types. Porcelain wares and glazed objects are produced at large-scale industry-level factories.

Shapes of cooking pots are unique to Sri Lanka. Shapes and surface decorations of ornamental pottery follow innovative designs suitable for contemporary taste. Noteworthy regional variations are absent, perhaps due to the small size of the country.

Although the craft is spread across the island, certain areas, namely Kelaniya, Alawwa, Molagoda, Kurunegala, and Matale are known for quality products due to the availability of better quality clays.