Manggeonjang refers to the craft of making manggeon, a type of male headband used before wearing a gat in order to make sure that strands of hair did not fall down. A manggeon is composed of a dang or salchum, which fastens the upper part, a pyeonja or seendan which fastens the sitting part, an ap to cover the forehead, and a dwi for fastening it at the back. Additionally, a gowanja, or small ring, and a pungjam, or half-moon-shaped forehead ornament, were attached for decoration or for the indication of social status. There is also another ornament, called a pungjami, on the front of the head, which functions as a gat fastener.

Manggeon was usually made of horsetail, but sometimes human hair. Production began with the weaving of the pyeonja, followed by the weaving of the ap and dwi, the connecting of the dang, steaming and dyeing, and, finally, the sewing together of all the constituent parts.

Jeju Island is one of the regions that specialises in Manggeonjang. Lee Su-yeo in Samyang-dong. was designated as skill holder. Kang Jeon-hyang, a daughter of Lee Su-yeo, has learned her mother’s skills and currently serves as a skill holder. 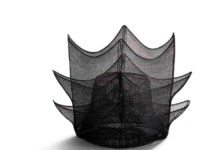