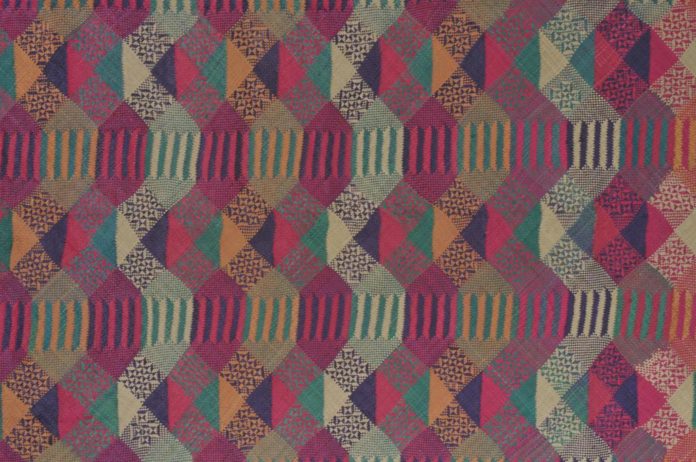 Filipinos have lived their lives amidst articles fabricated through plaiting. The banig or plaited mat, has serviced the Filipino for sleeping or sitting, for drying grain, as sails of water-going vessels, and in the past, for bundling the deceased in burial.

Mats are plaited with straw extracted from palms such as buri (Corypha elata), screwpine or pandan (there are about forty known species of pandanus in the Philippines,), and sedges like tikug (Scirpus grossus, S. erectus). To prepare straw for plaiting, young unopened buri leaves are stripped into widths from one eighth to one half inch and individual sedge stalks are flattened. Some straw is bleached by bundling and boiling in water laced with vinegar and alum. For mat designs, straw for floral and folial motifs and geometrics are dyed by boiling bundled straws in water with organic colouring agents, such as leaves, roots and bark chips. After bleaching, the straw is sun dried. Dyed straw is hung up to air-dry.

Plaiting simple mats uses the one-over-and-under technique. The designs are marked by “floating” straws inserted after the basic mat has been woven. The over- and-under technique has variations, using multiple straws in the folding.

Double mats are also manufactured, with a simple coarser underliner of thick heavy uncolored straw, and the upper portion of finer and coloured material. Fancy circular mats are woven like the crown of a hat. The plaiting starts at, and radiates from, a centre.

Before the coming of the Spaniards, and throughout the Spanish and American colonial periods, Filipinos wore hats for protection, as signifiers, and as part of dress ensembles.

Up to the early twentieth century, fifty hat shapes were in manufacture in most parts of the archipelago from assorted materials. There were two basic hat types:  the blocked hat, and the salakot. The material used in making a hat was its mark: finest bamboo (Bambusa spp.) in one millimeter gauge; buntal extracted from the petioles of buri leaves; again, as in mat making, tikug. Hats and mats are plaited at the beginning or end of the day, when the fibres are pliable. Two types of weaves have been used for Philippine hats: close or sawali, like the walls of some indigenous houses, and open or over-and-under.  Plaited hats are still being made in almost all regions of the country but in reduced quantities.