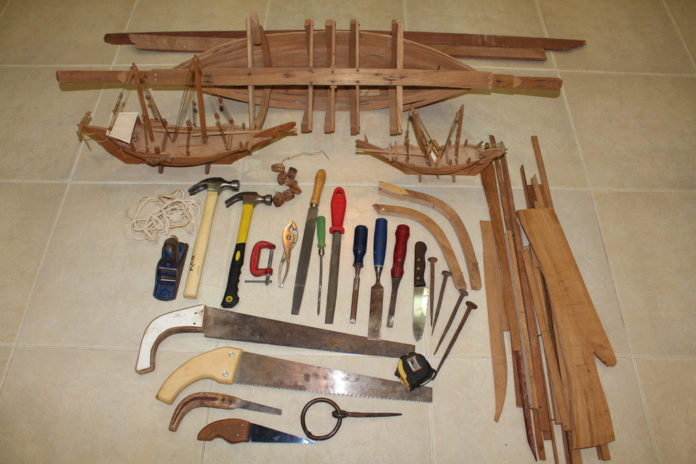 Making sailing ships was one of the most important handicrafts practiced in Kuwait. 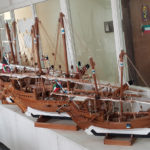 However, this craft has diminished and it is currently practiced only to make miniature ship for gifts decoration. Originally, building full scale sailing ships started early in the seventeenth century and later it flourished with the arrival of the specialized artisans Al-Qalaleef from Bahrain.

Most of the full size sailing ships were built in Kuwait. However, its wood was imported mainly from India. Teak wood was found to be the most suitable material for building such ships. Special nails with half sphere tops were made in Kuwait by local ironsmiths to be used in ship-building. The sails were sewn from durable white cotton fabric and were securely attached to the ship mast.

After World War II, the craft of sailing ships began to decline rapidly. Currently, there are few specialised workshops for the skilled artisans and their children to build miniature sailing ships. Some of those private workshops are located in Al-Doha city or at the artisans’ homes. Another equipped group workshop is located in Dewaniat Al-Qalaleef in Sharq city. We do not know the exact number for artisans working in this craft, but we can safely estimate them to be around 40 people. Simple carpentry hand tools such as hammers, saws, drills, axes, and other tools are used in making such ships. Living artisans mastering this crafts are Mr. Hussain Al-Bazzaz, Mr. Ibraheem Al-Felakwee.

Visitors who in interested in seeing all the different models of sailing ships can visit the display area in Dewaniat Al-Qalaleef located next to Sharq Mall. In that facility, visitors can see the different types of sailing ships and can purchase one or more of them. Kuwaiti sailing ships are known by their distinct designs which help them sail and maneuver safely and comfortably in the sea.  Boom safar is the ship that is unique to Kuwait and it is features on its metal currency.

Jamal, Mohamad A. (2009) The Old Crafts, Trades, and Commercial Activities in Kuwait. Center for Research and Studies on Kuwait. Kuwait.

003-1) A master artisan working on repairing a miniature sailing ship at the workshop of Dewaniat Al-Qalaleef.

003-2) Miniature sailing ships in display at the exhibition and sales shop of Dewaniat Al-Qalaleef.