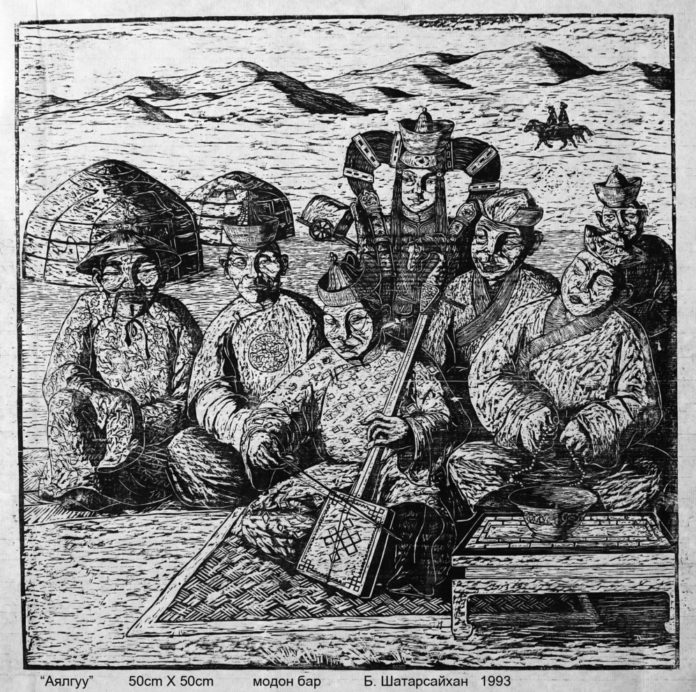 Mongolians have been carving on wood, metal, stone and oil cloth from early days historically. From all of these carvings, woodcut printmaking has become the traditional hand craft practiced by artisans today. The main purpose of this artwork is to carve everyday lifestyle of people, religious purpose, observance of culture, and writing. Carving is important to Mongolian religion. For example, to blow away mettle flag (khiimoriin dartsag) and to carve them with wood for religious and ritual purpose. After 1950s, wood carving has been included in traditional hand craft which means it is considered as one of engraving. Nowadays, wood carving has become less popular because of its demanding techniques, long labour, skillfulness and special mastership. Handmade woodcut printmaking costs more and people make less because of its long, hard labour, so it is considered rare.

Usually the materials require wood, especially soft wood such as pine. Cedar wood is hard, so in order to use it has to be boiled into oil; and cannot use the root of the wood. The knife that is used for the carving has to be sharp because it requires very accurate process and careful attention. Early day’s cinder, ash, grimes, dirt were used after carving the wood but nowadays, specialised dye is being used. After making the wood carving, the image has to be re-used for paper and cloth pictures.