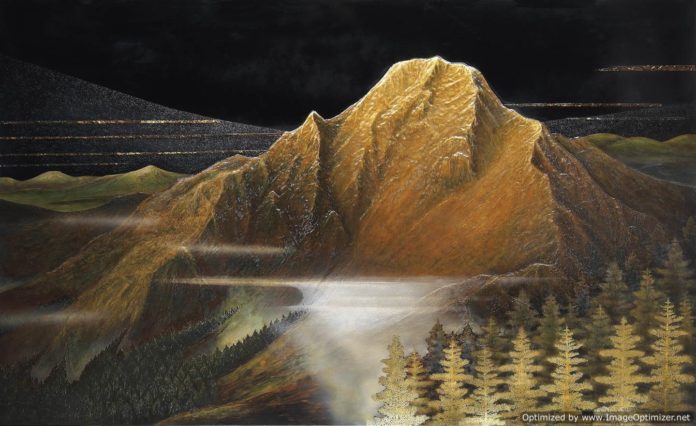 Penglai tu lacquerware is endemic to Taiwanese culture. Penglai tu techniques involve inlaying and grinding on the pre-carved wooden body. This technique dates back to Japan’s rule of Taiwa, particularly in Taichung City.

“Penglai” is the terminology used to phrase the “ancient hypothetical fairy island.” Now “penglai” refers to Formosa Taiwan. “Tu” is the Japanese word used to refer to the techniques of lacquer.

The style was well-loved and received in the market. In 1916, the newspaper called it the “Penglai Tu Lacquerware.” In 1928, the Taichung Municipal Crafts Education Center was established. Yamanaka Takao was employed to take charge as the school principal. The centre quickly became cradle of many young talents of the lacquer crafts. The penglai tu techniques soon flourished.

Penglai tu stands out in three aspects. First of all, the decorative motifs originate from real life. In this way, penglai tu lacquerware holds the keys to unlock the memory of Taiwanese popular culture. Second, a simple lacquer thread carving technique is applied to bring out the unrefined quality of the rustic Taiwan. Last, but not least, the use of aboriginal totems to replace traditional Japanese patterns vividly displays Taiwan cultural vitality.

In the lacquer crafts circle, many Taiwanese masters, including Chen Huo-qing, Wang Qing-shuang and Lai Gao-shan, were disciples of Yamanaka Takao. Thus, the penglai tu style not only came across with them in their apprenticeship, but has been reflected in the works in several of their artistic career.

To take a look at the penglai tu lacquer works, visit the Laigaoshan Memorial Art Museum and the Fengyuan Museum of Lacquer Art, both situated in Taichung City. In addition, the National Taiwan Craft Research and Development Institute (NTCRI), from time to time, opens its museum collections to the public.