Fabric styling being one of the most remarkable areas of applied art of Uzbekistan and has a rich historical traditions. The main centers of the Uzbek art fabrics were developed in the nineteenth century. Along with cheap plain fabrics for mass consumption produced in almost all villages and towns, special weaving manufacturers also produced high quality silk and semi-silk fabrics, named ikat or abr (translated from Farsi as “cloud”).

Such art fabrics are divided into two large groups: shoyi, in which both the warp and weft are of pure silk, and fabrics of the adras type, in which the warp is of natural silk and the weft consists of cotton threads. The thickness of the weft thread is several times larger than the warp, making the surface of the fabric ribbed. The abrbandi method  consists of a reservation of separate sections of the warp by bonding it, followed by staining in accordance with the pattern and paint. This method created an interesting effect: the pattern acquired vague contours. The colour of such silk fabrics ranged from two-color to multicolour. 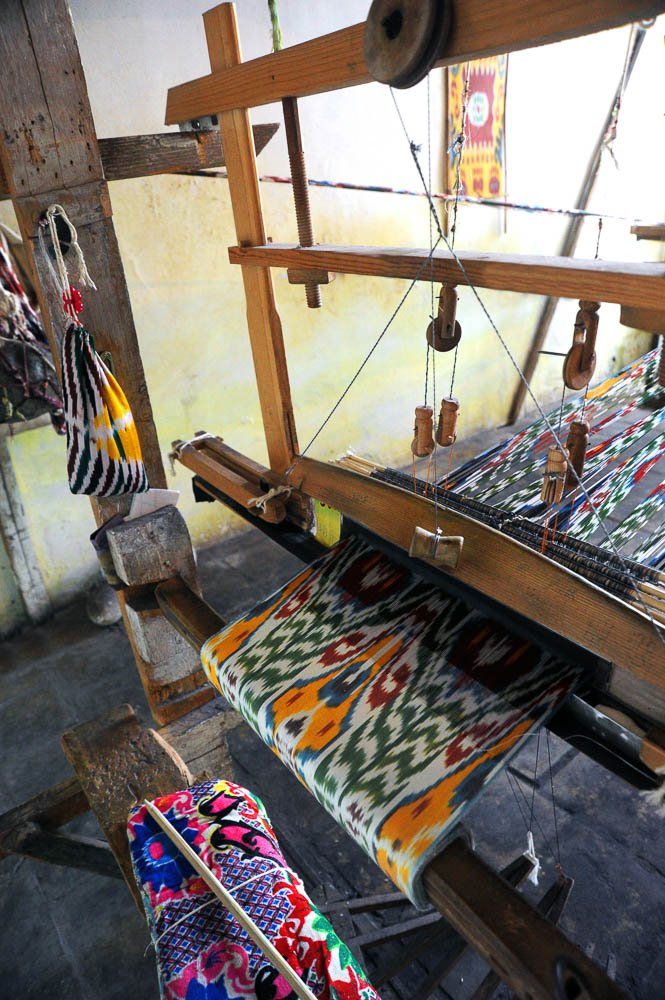 Patterns of the abr fabrics can be divided into vegetable, zoomorphic and geometric. The most numerous are patterns which are based on images of life items. The multicolor pattern that includes all the colors of the spectrum is called tiri kamon (a rainbow), bahar (the spring) and chaman (blooming).

In the early twentieth century, in the central regions of Uzbekistan, men’s robes with a tailored fit and various women’s dresses were manufactured. In the second half of the nineteenth century, fabric weaving in Uzbekistan was the most developed branch of crafts. Bukhara, Namangan, Margilan, Samarkand, Shakhrisabz, Kitab, Karshi, Khujand, Urgut and Khivacities were famous for their fabrics.

National craftspersons (abrbandchi) widely and skillfully used vegetable dyes until the 1870s. Then aniline dyes began to be popular in the textile industry. In 1930 – 1980, with the development of industrial enterprises in Tashkent, Samarkand, Margilan a network of small crafts began to gradually decline. In 1990s owing to the revival of traditional customs and festivals, growth of attention to the national clothing, demand for handmade art silk fabrics has increased. In various regions of Uzbekistan, and especially in the cities of Fergana valley (Margilan and Kokand) production of handmade silk fabrics has begun to be restored.