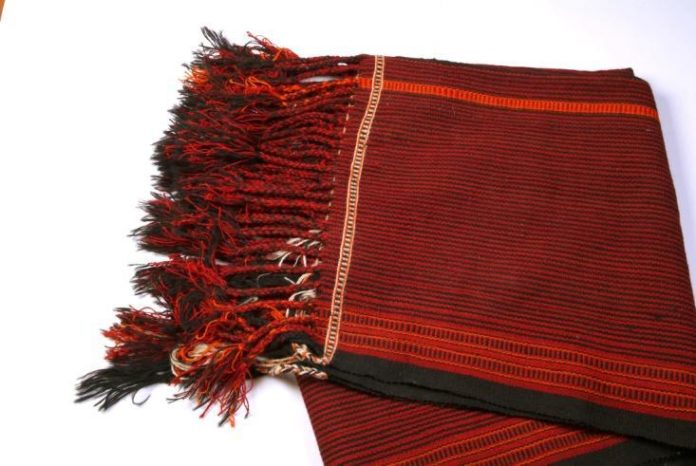 Omanis have had a strong textile industry since ancient times. Archaeologists have discovered antiquities indicating that ancient inhabitants of Oman used fabrics. The antiquities discovered were in the form of weaving tools made from animal ribs and silk threads wound around the hit of the khanjar (dagger) in a graveyard in Samad al-Shan (an archaeological site in the Sharqiyah province; Abdulla Al-Harthy, 2000: 235-236).

The weaving craft is known as Sado in Oman, and is practised by Bedouin weavers who have woven sheep and goat wool and used simple wooden ground looms similar to those used in ancient times. Bedouin women were famous for making socks from sheep wool and spinning camel adornments on their spindles. The Samail region (a Wilayah located in the Ad Dakhiliyah which is one of the governorates of Oman with Nizwa town as the regional centre) is famous for its textile industry. (Public Authority of Crafts industries:2014).

The raw materials of the threads used in the textile industry are varied. There is flax, cotton, silk and wool. Silk is the most important of these. It has many kinds, some of which are fine and transparent. It is imported from Southeast Asia to make clothes, head covers and carpets for the rich (Suad Mahir, 1986: 63). Wool is a traditional raw material and is historically considered second to flax. It is a common raw material that is used in clothes and in Alzawali (carpets). Sometimes it is mixed with cotton threads. This wool typically comes from sheep and camels, and sometimes from goat hair which is mixed with wool to strengthen its threads.

Cotton was grown in most of the Wilayat (provinces) and regions of the Sultanate. The best kind is al khadrang (a greyish natural cotton of pure and strong quality) which is grown exclusively in Al geela (a village in the Wilayat of Samael in Ad Dakhiliyah Region) in Oman. (Abdullah Bin Nasser Al-Harthy:2000:235) To prepare cotton for spinning, the craftsman would separate cotton from seeds in a process locally called talbeeb. Then cotton was teased and shaped into a ball. The spinning process would begin by rotating the spindle until a spool was formed. Then the threads would be dipped in hot rice water or boiled dough (soug) in order to strengthen the cotton threads. The craftsman would put the threads on several wooden rotators and take the end of the threads from each rotator, a process called shadda) and tie them to a big rotator to measure the quantity of the spun threads (one big rotator would make one loincloth and a half). Finally, the al sadi process would begin as the starting point of weaving on an al karga (loom).

There are different ways to use cotton fabric, such as the loom (al karga), which has many different products, including al saidiya turban, wizar [loincloth], alshadir or dress, fabrics with different colours for women, alhadhiya (threads consisting of 12 to 18 cotton or silk added to the turban or women’s head covers), and Omani Kumma (part of Omani men’s head costume cover).

Hair or wool weaving is one of the craft industries practised by the Omani people. They use its products in their clothing and household furnishings besides other purposes in connection with camel and cattle breeders. The craft is particularly mastered by women. It has been practised in many parts of the Omani regions including, Wadi Alghul (an abandoned village, located to the northwest of Al Hamra in Ad Dakhiliyah region of Oman), Wadi Alkhawatir in Al Dakhiliyah (between the cities of Nizwa and Ibri), which are famous for their good quality woollen threads. This kind of craft is also in widespread use in Barka (a coastal city in the region Al Bāţinah, in northern Oman; Doroth Bunifillin, 1988: 176-177)

The weaver, before the spinning process, teases the wool with his/her hands to remove any impurities. As for the goat hair, the weaver beats it with two pieces of wood repetitively to tease and clean it. In order to weave the wool or hair, the craftsman uses the relevant karga to make various products such as al fili (the Bedouin tent), al saha or al shamla (cloak), and al khurg (saddlebag).

Certain tools are used in these crafts, such as the loom, the spindle, comb, “Alhuwaif” (carpet comb), needles, and scissors. The weaver uses many colours, obtainable from the surrounding environment (roots of Almahdadi tree and leaves of alfuh tree) to dye the wool threads.