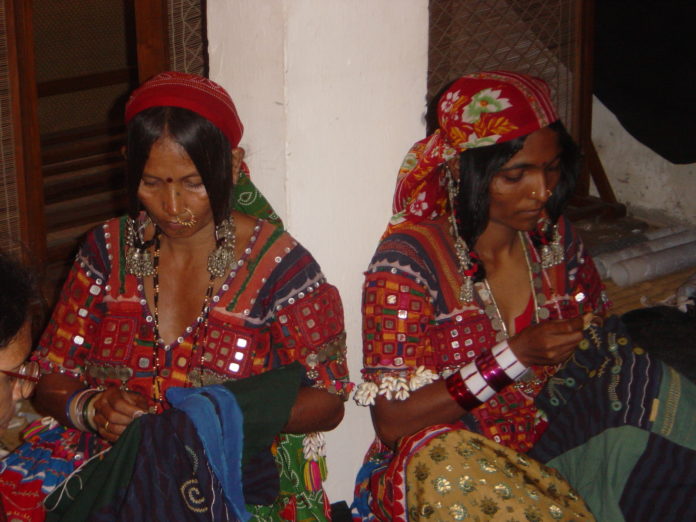 Dress  has long been a marker of identity in india and none more so than the embroideries and dress that distinguish the Banjara tribals. A semi-nomadic community the Banjaras (also called Lambani, Lambadi, Wanjara among other variants) have a recorded history from the twelfth century rule of the Rajput king Prithviraj Chauhan’s  battles with invading armies. As professional long-distance transporters and traders of goods and camp followers of armies during war, their caravans carried military  supplies. In times of peace, the Banjaras transported and traded in salt, spices, grain, cotton and other manner of goods. Spread across India, the community remains  bonded by the language they speak, Ghorboli,  and not by their geographic  place of origin in Rajasthan. 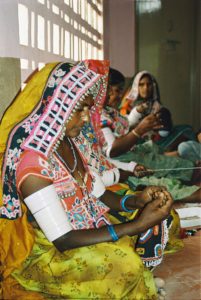 The traditional costume of the Banjara women consists of a kanchali—a backless blouse, phetia or ghagra—a  full gathered skirt, and a head mantle—the chhatiya dominated by the colour palette of bright yellow, orange, black and red that identifies them immediately. Heavily embroidered, the stitch usage and  placement is specific enough to associate the wearer with their respective tandas—the historic Banjara camps. The bold, colourful, asymmetric embroidery is further embellished with coins, beads, cowrie shells, along with pom-poms, trims and applique work. The ubiquitous use of mirrors, large and small, is considered to be auspicious as it deflects the evil eye. Besides their dress, the women embroider personal and home accessories for the family from storage bags, pot rings, belts, envelope pouches, coin purses to ceremonial cloth and seat covers, to animal trappings and accessories.

Previously embroidered only for personal use, over the past few decades several organisations have worked closely with  Banjara women to revive traditional stitches, patterns and designs  while providing them with income from their commercially generated work. A range of Banjara embroidered products now being made available for wider consumption.