This craft was found in Jerusalem at the beginning of the Ottoman period, where tiles were made that covered the walls of the Dome of the Rock, placed during the rule of the Sultan Suleiman the Magnificent in 1516 A.D. (969A.H). Craftspersons came from Turkey who then settled in the Al-Haram Ash-Sharif area.

Waqf documents mention that ceramics has prospered due to the policies of the Higher Islamic Council in 1917, which specified the restoration of tiles covering the exterior walls of the Dome of the Rock. For this purpose, an Armenian specialist was brought to prepare for this work who in turn brought many professionals in the field from his home town Kutahiyeh, historically famous for its ceramics. This included the Karakashian and Balian families, who stayed in Jerusalem as a ceramic expert. These families, who had been working in ceramics for one-hundred years before coming to Jerusalem, have contributed to the prosperity of this industry in the town. The first ceramic factory in the town was opened in 1922. Neshan Balian, the head of the Palestinian Ceramic Factory, still situated in Nablus Road since its establishment, mentions that the first Palestinian Ceramic Factory was founded in Jerusalem by the two families back in 1922. However, the families separated in 1965, and the one in Nablus Road was known as “The Palestinian Ceramic” run by the Balian family, while the Karakashian family moved to the Old City and established another factory in the Via Doloroza road, which became known as the “Jerusalem Ceramic”. The city of Hebron at the present time is considered the leading Palestinian city for the production of ceramics. In the year 2000, the number of ceramics factories in the city was 30. In the year 2010, the number decreased, to 19 factories owned by families, including Tamimi, Fakhouri, Natsheh, and Al-sharif.

The most famous objects produced by this craft are plates, vases, candlesticks, pitchers, cups, and tiles. In the beginning, these objects were hand-made, and specially-designed moulds were used in the making of tiles, and with a special kind of clay which used to come from the Jenin area, north of Palestine, distinguished by its yellow color. This continued until the end of the seventies, when the factories owners started to import their materials from England and Italy, due to the tarnishes created by the local clay. Modern equipment and machines have also been imported to produce objects, which replaced the handmade processes. Local glazes used for decoration are also now imported.

Palestinian ceramics in general, particularly from Jerusalem and Hebron, is special in its cobalt blue color, which is prepared by mixing blue varnishes made of cobalt and aluminium oxides. The firing of the ceramic and the oxides used to take place in kilns, heated by burning wooden logs, but was later substituted by solar energy. In the Haram el-Sharif area, old kilns were found, where wood was used in the firing of tiles. This blue ceramic is in high demand. 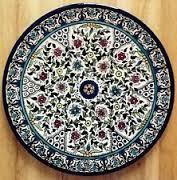