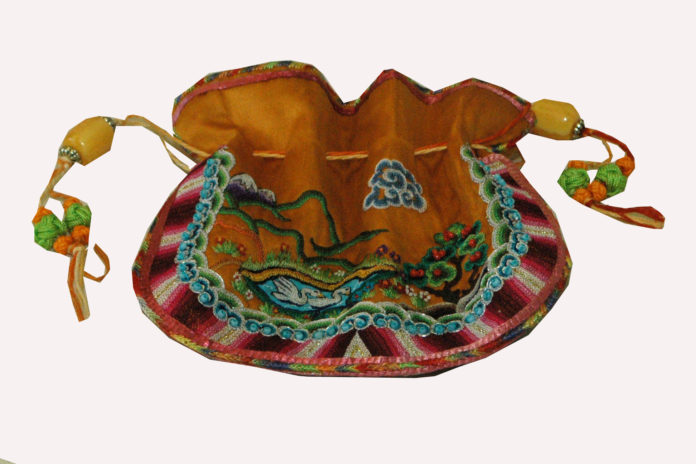 Mongolians have been making traditional embroidery from the thirteenth century (Khunnu era) until today. In general, embroidery techniques and how to make them was passed down from mother to daughter, relatives, friends and neighbors. Embroidery is made on top of the clothing, household products, religious and spiritual items and many more. It is popular to use silk, fabric, leather and felt as the embroidery base material. Embroidery is also called “needle run stitch” and it is less common than other artworks in Mongolia. It entails using one needle and two different.

First, the material is threaded into the needle and from the bottom of the fabric a hole is made the thread is drawn to the top. Then the second thread wraps the first thread to make the line or the artwork. This kind of embroidery lasts long. One has to be very careful to clean and wash this kind of embroidery as well. Depending on what kind of picture or theme, one can choose the width of a thread and a needle. For example, if you are using silk thread, the needle has to be narrow and fine.

The specialty of this artwork is that it can be passed down 3-5 generations which shows its durability. After 1950-1960s, people were interested in embroidery artworks. Starting from 1989, people started to have competition on making embroidery so it has became popular and easy to develop. Although it has become popular, young people these days do not make embroidery because it is a hard labor which demands intense concentration. It might disappear because of the development of technology where one can make embroidery using special machines rather than by hand, traditionally.

Embroidery artwork is hard to find. Usually one can find it in religious stores or from the artists themselves.  S. Tserenlkham is one of the Mongolian talented embroidery artists who attended many international exhibits and events, including Expo 2000 Berlin, Germany, CMET 2002 International Trade Fair, International Handicrafts Exhibition, New York, USA, in 2006.