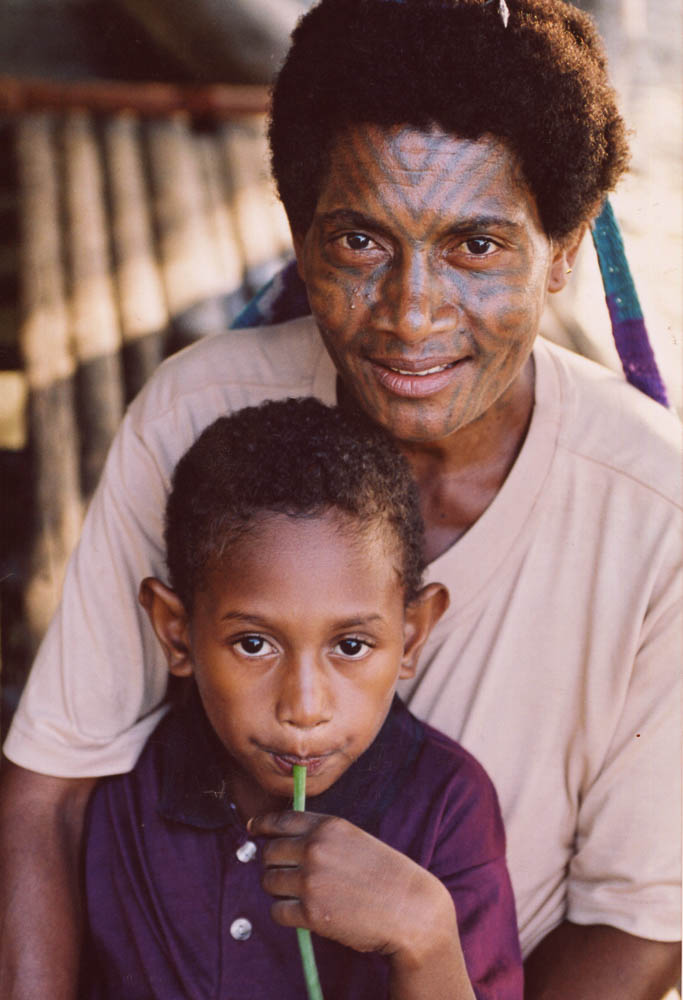 One of the most striking cultural traditions in Papua New Guinea’s Oro province are women’s facial tattoos. Among the Maisin people, facial tattoos (ro-bua) were part of female initiation rites (Hermkens 2013). In general, Maisin girls would be between 10-15 years when they received their facial tattoo, which was often applied by one of their female relatives. The tattooist would shave the front part of the girl’s hair and the eyebrows, and with the girl’s head placed on her lap, draw the design on the girl’s forehead with a charcoal based pigment. She would then tattoo this area with a bundle of thorns applied to a little stick (called tata), which was tapped into the girl’s skin with another stick. The tattoo wounds were subsequently rubbed with a cloth drenched in the black pigment. Probably starting from the end of the Second World War onwards, the thorns were replaced by bundles of three or five steel needles, which were pierced into the skin.

In general, tattooists commenced with the girls’ stern and nose, followed by one cheek and then the other. Depending upon the girl’s strength, this was done in one day, or over a period of two or even more days. In the subsequent days, the tattoo would be completed, tattooing in some cases also the neck. After the design had been completed, the girl’s swollen face was given a few days rest. During these days the wounds inflicted by the tattooing were allowed to heal, which caused the black pigment to come outside. Subsequently the whole process of tattooing was repeated for up to four or five times, until the tattoo had obtained a thoroughly black look. When girls were not strong enough to endure the pain and the process could not be repeated, the tattoo would remain light, and the final tattoo was regarded as not being right.

During the entire tattooing process, the girls had to cover their face with a piece of cloth whenever leaving the house. Especially boys and men were not allowed to see their faces, and as a consequence were not allowed to enter the tattooist’s house. In the more distant past the girls would cover their entire head and a large part of their bodies with a large tapa (bark cloth), called feoki, while more recently girls would often use a towel (Barker and Tietjen 1990: 223). Barker and Tietjen (ibid) mention that in the past the girls would also have to sit, eat, and sleep behind a tapa cloth screen, secluded from the tattooist family. But more recently, they were allowed to eat and sleep with the tattooist family members, often with their heads uncovered so the tattooist’s husband was, in contrast to other men, able to see their faces.

After having withstood the painful tattooing sessions, the seclusion and other restrictions, the girls were ready to literally face the outside world as soon as their faces were no longer swollen up, and the tattoo looked at its best. The tattooist would warn the girls’ parents so they could get all the decorations, gifts and food ready. When the day of the girls’ ‘out-coming’ had arrived, the tattooist would wash the girls and decorate them with all kinds of shell necklaces and a red loincloth made from tapa (bark cloth). When finished, the girls were shown to the people who had gathered in front of the tattooist house. Subsequently, the girls were given a tapa decorated with their father’s clan design to wear. For the next three weeks, they would walk, work, and sleep fully decorated, thereby visualizing they were no longer a young girl, but a marriageable young woman belonging to her father’s clan (see further Hermkens 2013). Today, it is no longer obligatory to obtain facial tattoos in order to get married. And since the late 1980s, young Maisin girls are no longer interested in the perseverance of this custom, nor in undergoing the pain of facial tattooing. However, in other areas of Oro Province the practice is still alive, such as near Tufi, where a few young women recently had their faces tattooed (see also Hasselberg 2012: 159-162).

Hasselberg, Jan 2012. Beautiful Tufi. Between the Past and the Future. Central Milton Keynes: Author House. 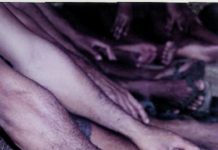