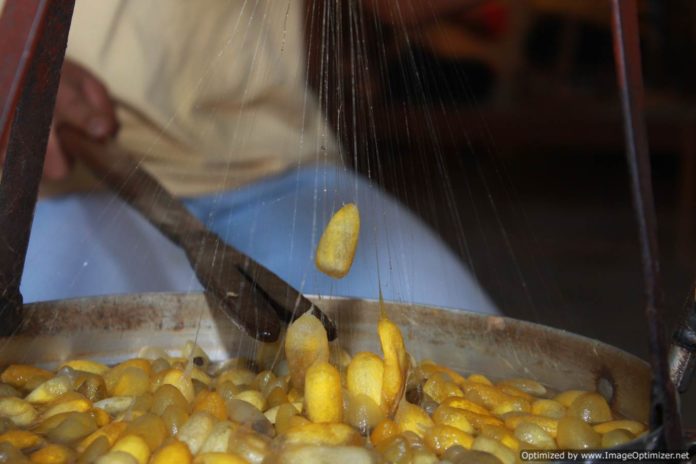 During the twentieth century, the Cambodian silk industry went through major phases of growth and decline. Following World War I, silk production reached one hundred fifty tons a year, but declined to hardly reach twenty tons a year at the end of the 1960s, mainly because of the conversion of the lands into agricultural areas. During the 1970s, the endless conflicts brought an end to the silk industry, destroying mulberry trees, silkworm breeding farms and the passing of ancestral skills. 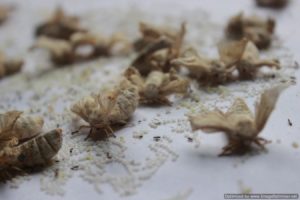 Nowadays, many regions of the country strive to preserve their skills in silkworm breeding, dyeing and traditional weaving. An increasing number of local individuals also try to revive a specificity of Cambodia—the production of the “golden silk,” which gets its name from its bright yellow color due to the breeding of a special kind of silkworms that turn into yellow cocoons.  This includes organisations in the Siem Reap province, including Angkor Silk Farm at the National Silk Center, Golden Silk Pheach and Institute for Khmer Traditional Textiles (IKTT) 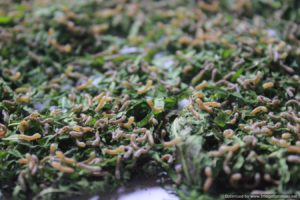 Breeding these silkworms requires a certain expertise in the field of cultivation since silkworms are exclusively fed with mulberry tree leaves. Various researches were conducted by the Cambodian National Silk Center to determine which type of mulberry trees was the most suitable for Cambodia’s soil and climate. It resulted that neither the Thai, Chinese, Indian nor Cambodian species proved to be better than the others; the silkworms did not show any preference for any leaves in particular either. The research showed that the quality of care given to the silkworms was more important than the type of tree leaves that were used to feed them.

Growing mulberry trees as silkworm feed involves several steps: after three months in a greenhouse, the seedlings reach a meter in height and are transplanted outside; after six months, they can measure two meters high; they are then cut at twenty centimeters from the ground, and their leaves are gathered to feed the silkworms. The biggest branches are replanted in the greenhouse. Mulberry trees are cut four times a year. 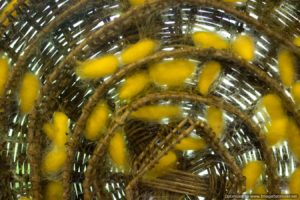 The Bombyx Mori is the most familiar species for silk production. At the Angkor Silk Farm, one of the few Cambodian sites that still produce golden silk, two varieties of silkworms are bred: an indigenous polyvoltine, and an hybrid polyvoltine and bivoltine, which results from the crossbreeding of Thai and Cambodian species.

The female lays about two hundred fifty to three hundred yellow eggs; after ten to twelve days, the eggs turn grey. They are then put into a wooden box wrapped with a humid towel so as to maintain a temperature of 25-28°c. After two days, two-millimeter long silkworms emerge from the eggshell. It then takes 26 days from this moment until the spinning of the cocoons, during which the worm sheds its skin four times.

After each molt, the worm goes through a new age. During the first four ages, worms are fed four times a day. During the fifth age, their needs increase and they are continuously fed during seven to eight days. When they turn yellow, the worms are considered ripe; with a quick movement of their heads, they spin their cocoons by secreting a liquid from their mouth. The secreted liquid hardens in contact with the air and forms the silk filament. After five days, the cocoons are done; the moths turn into a chrysalis and secrete a liquid that breaks the silk filaments so as to go out from the cocoon. To prevent the worms from breaking the cocoons and thereby the silk filaments, farmers put the cocoons directly under the sun, killing the moths inside.

About 20% of the mature chrysalises are spared to ensure the reproduction cycle and therefore repeat the breeding cycle. Spared cocoons are selected by sorting the ones that are bigger and more rounded.