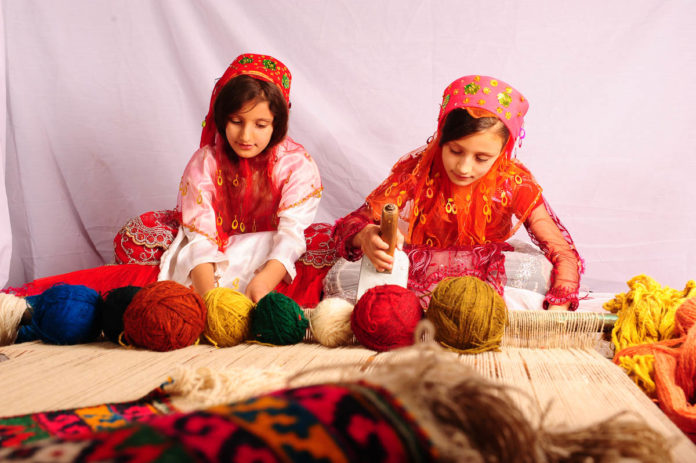 Kilim is a kind of wool carpet and cover without pile, which is woven as double-faced and jointed. The raw material is usually sheep wool, which after being spun and dyed is used as warp and woof. In some weavings, cotton thread is used for a wrap instead of worsted thread. In addition to sheep wool, fibre from other domestic animals like camel and goat is used in kilim weaving.

The evolution of the kilim includes jajim, ziloo, somak and verni. While differing in design, materials and weaving techniques, they share the common feature of having no pile. In strict terms, kilim refers to the weaving technique of one knot below and one knot over. Being double-faced is among the advantages of this weaving so it can also be used as a curtain, a wrapper for bedclothes, bed sheet and tablecloth.

The apparatus of kilim weaving is a simple wooden loom in which the warps are moved by a cylindrical wooden tool called koji and the woofs are put on each other one below and one over. There are two types of kilim weaving looms—permanent loom and ground loom. The latter is horizontal and is usually used by nomadic tribes and the former is vertical, which is usually used in villages and cities. Kilim weaving is performed using different methods like simple, jointed, rotary cords, extra weft and bent weft, weft-like and warp-like.

Sirjan has been designated a World Craft City for Kilim – Shiriki Peech. The distinct patterns of their kilim are often related to the different tribes of the Kerman region. The village of Darestan is particularly notable for its kilim rugs.