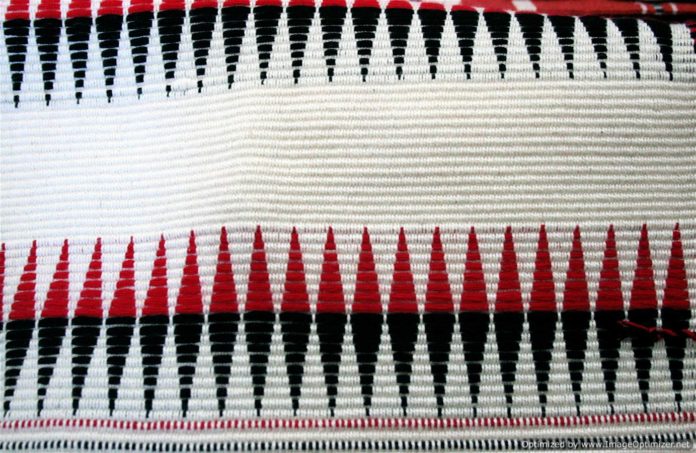 Nagaland in the North-East of India is home to 16 main tribes and several sub-tribes each distinguished by custom, dress and dialect. The symbolic dress of the tribe was additionally an identifier of the clan and village of the wearer, with some patterning reserved for specific occasions. In particular, the bold distinctive geometric weaves and motifs revealed the standing of the wearer in the tribal hierarchy; in this case the patterns and colours were worn by warriors who had an established record of achievement. In the past, tradition demanded that every home have a loom. Weaving was considered an essential perquisite for a marriageable girl, with spinning the cotton yarn and dyeing being part of their skill. 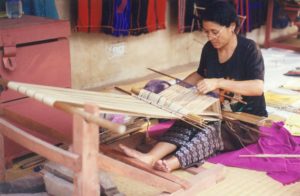 The portable Naga loin loom has a back strap with a continuous horizontal warp. The kotong (its six sticks) functions as the warp beam. It is fastened to the wall of the house by loops that are set at a distance equal to the breadth of the cloth to be woven. The lower cloth beam is notched at either end and attached to the weaving belt (aphi), which is strapped to the small of the back, thus retaining the tension on the warp. The woven cloth tends to have a ribbed texture. As the width is relatively narrow, two to three pieces are generally stitched together to complete a garment. 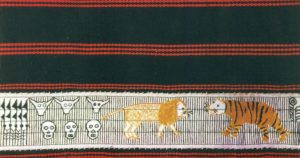 The natural dye color palette of black, blue, red and white with additions of green and yellow is obtained from minerals and forest products. The distinctive patterns include the Ao tribe warrior shawl, the symbols on its central white band representing valor, strength and prowess. It is hand painted in black with a sharpened bamboo stick. The colour is obtained from tree sap, mixed with strong rice brew and bamboo leaf ash. While traditions and beliefs continue to be associated with Naga weaving and wearing of the traditional dress, the distinctive patterns are now woven for wider markets .