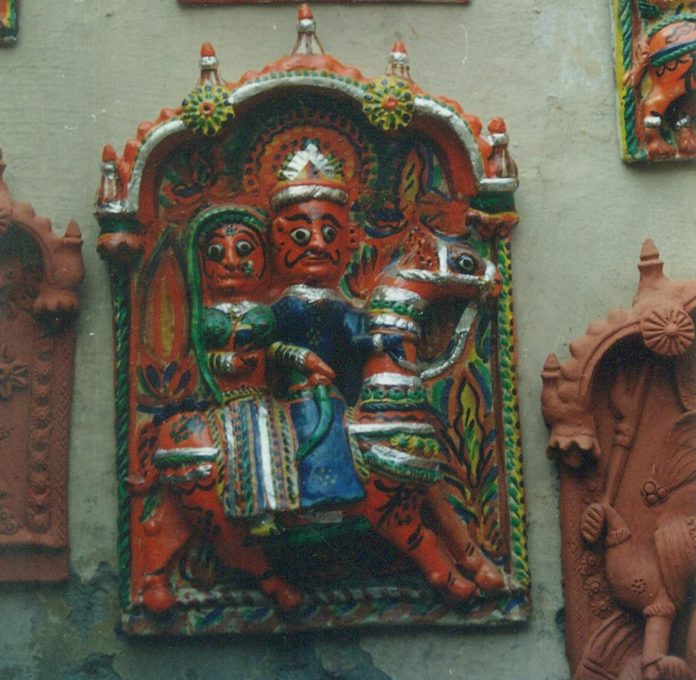 The terracotta plaques made in Molela, a small village in Rajasthan, mark it as an important hub on the terracotta map of India. Here the Kumbhar potter community—a little over twenty families—have for generations moulded terracotta deities for worship. The images sculpted are not only those that are particularly sacred in Rajasthan, but also include the gods and mother-goddesses of the Hindu pantheon and images from animistic beliefs including the Nagdevta, the many-hooded serpent god worshipped since ancient times. Sculpted in iconographic detail, these images are not standing idols, but are cast as relief images shaped onto plaque-tiles for installation on the wall or in wall-recessed altars. 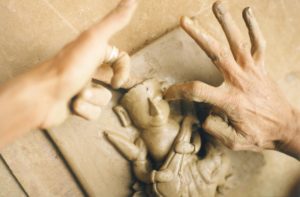 The Bhil, Mina, Gujjar and other tribal communities are the traditional clients of the Kumbhars. They travel to Molela annually with their bhopa, the priest-bard of their sect, to select the votive plaques. The chosen plaque is ceremoniously washed in the nearby river and is reverentially kept raised above waist-level on the journey back to the village for its consecration.

These plaques are entirely moulded by hand: the wheel is used only for a few sculptural details. It is customary in Molela that the men mould the figures while the women prepare the clay and paint the finished image. Kneading, pinching, squeezing and forming the clay, the potters continuously refine the figures pausing only to permit for drying and setting. The plaques are baked in a home-made kiln with no temperature controls as the experienced Kumbhars gauge the color of the flame, its height and intensity to know when the baking is complete

It was in the late 1970’s that attention was drawn to the potters of Molela when Mohan Lall Kumbhar, now the community patriarch, demonstrated his skills across India and overseas. Innovations in theme followed with the potter community adapting to their expanded clientele to craft wall plaques and murals on themes from girls education to village scenes, women empowerment and urban landscapes.