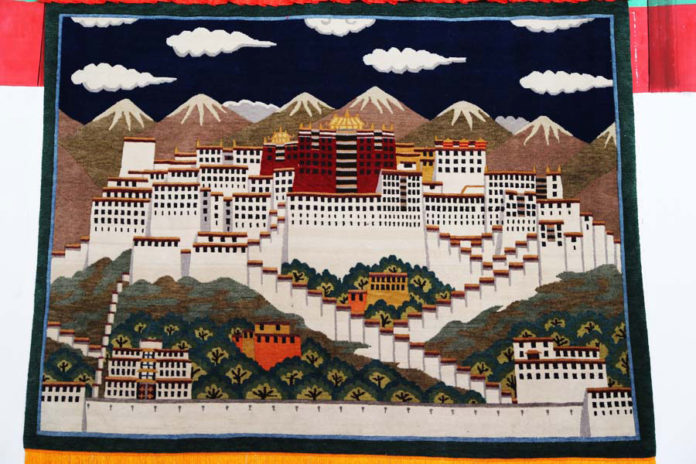 Tibetan rug-making is an ancient, traditional craft. Tibetan rugs are traditionally made from Tibetan highland sheep’s wool, called changpel. Tibetans use rugs for many purposes ranging from flooring to wall hanging to horse saddles, though the most common use is as a seating carpet. A typical sleeping carpet measuring around 3ftx5ft (0.9m x 1.6m) is called a khaden. 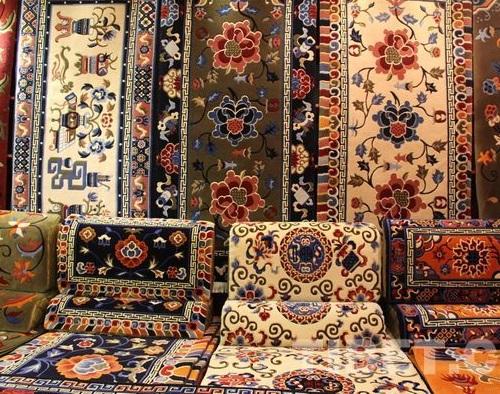 The knotting method used in Tibetan rug-making is different from that used in other rug-making traditions worldwide. Some aspects of the rug-making have been supplanted by cheaper machines in recent times, especially yarn spinning and trimming of the pile after weaving. However, some carpets are still made by hand. The Tibetan diaspora in India and Nepal have established a thriving business in rug-making. In Nepal the rug business is one of the largest industries in the country and there are many rug exporters. Tibet also has weaving workshops, but the export side of the industry is relatively undeveloped compared with Nepal and India. 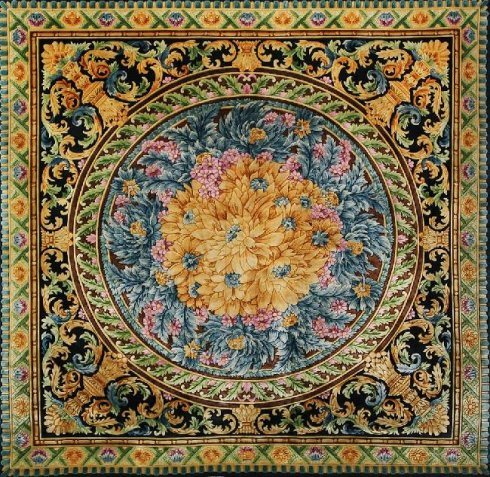 Tibetan carpets from the nineteenth century (perhaps earlier, though mostly carpets from the nineteenth century survive) are relatively restrained in terms of design and colouring. Carpet makers at that time were restricted to a narrow range of natural dyes including madder (red), indigo (blue), Tibetan rhubarb (yellow) and Tibetan walnut (browns and greys), with a few other local plants producing yellow and greenish colours. Motifs consisted of two classes: the first type included simple geometric motifs such as the checkerboard and gau (amulet) design that probably formed part of an ancient Tibetan design repertoire, mingled with medallion designs and other motifs derived from Chinese decorative traditions.

From the early 1900s, a wider range of synthetic colours became available to Tibetan weavers, and this seems to have stimulated the production of new and more complex designs, also based loosely on traditional Chinese motifs. The period of 1900-1950 saw the production of many colourful new designs featuring dragons, phoenix, floral motifs, clouds and so on. Though the main influence was Chinese, Western textile designs were also copied occasionally. These designs still form the core of the Tibetan weaver’s repertoire today.

In Lhasa, rug stores cater to both to local, national, and international tourists. Dark red Turkish imitations from factories in Qinghai are sold alongside other Chinese rugs and even silk carpets with Middle-eastern designs. Amongst local Tibetans, replicas of traditional Tibetan designs from machine-woven polyester are popular inexpensive alternatives to hand-made carpets.

Government-sponsored workshops target the tourist and “official delegation gift” markets, but the wools have short staples and make carpets that are more likely to shed fluff and become matted after cleaning. A popular design is the Potala rug, featuring a picture of the Potala Palace and intended to be hung on the wall. Carpet workshops founded by foreigners use wool with longer staple lengths and high lanolin content, which make for a stronger content, but are much more expensive, and have not found much success. However, as an economic activity, Tibetan rug-making provides valuable cash income for rural communities who weave in the winter months. Several overseas investors and NGOs are trying to encourage a revival of high quality local wool and natural dyes in Tibetan rug-making.