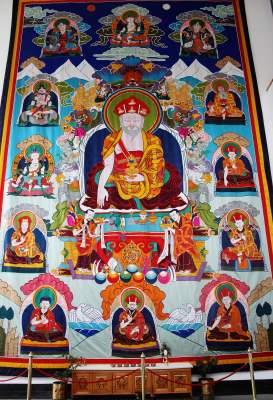 TshemZo (sewing) includes tshemdrup (the art of embroidery), lhemdrup (the art of appliqué) and tsho lham (the art of traditional boot making). Like all the arts and crafts in the country, this craft too has been formally categorised during reign of the fourth Desi Gyalse Tenzin Rabgye (administrative ruler of the country) in the late seventeenth century.

However, during that time the art of embroidery and appliqué were normally practiced by the monks. They made religious wall hangings known as thankas that depict Buddhist gods, goddess and deities.

The craft is mainly associated with the monks and men. Only in the year 2000, with the introduction of TshemZo course at the Thimphu Institute of Zorig Chusum, did women also take up this craft.

The art of embroidery and appliqué of the religious wall hangings and pieces are mainly done on the Chinese brocades with the imported silk yarns. The materials like brocades and silk yarns are available in the local market.

Thankas (wall hangings) of religious Buddhist figures and decorative pieces made from tshemdrup can be found in temples, monasteries and Bhutanese homes in the country. The art of appliqué associated mainly in producing thongdrels (a large wall hanging) that are usually displayed during religious festivals across the country.

Traditional boot making is another craft under the TshemZo. Tsho Lhams or traditional boots are made from brocade and decorated with elaborate embroidery. The boots are worn at formal events and ceremonies.

With the TshemZo course at the two institutes of Zorig Chusum in the country, more and more youth are taking interest in this craft. The embroidered pieces of Buddhist gods, goddess and traditional designs are found in all the handicrafts shops in the country.